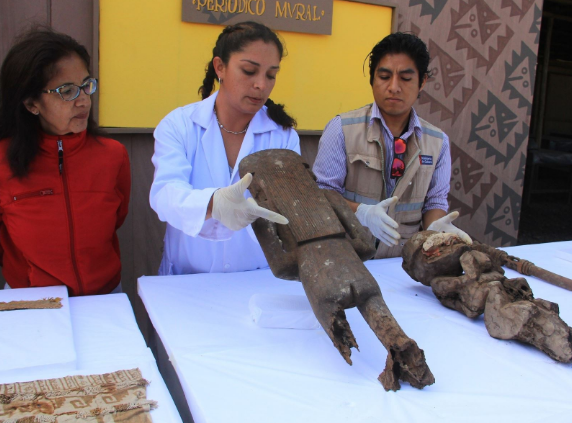 Archaeologists excavating in Peru’s largest pre-Columbian city, Chan Chan, uncover a rare wooden sculpture depicting a woman, which may redefine our understanding of the role of women in ancient Peru.

During her excavations in Northwest Peru, archaeologist Cintia Cueva Garcia discovered four wooden sculptures laid out in a funerary format. While wooden sculptures are a common find near Chan Chan, these ones in particular raised an intriguing historical flag.

Two of the sculptures were most fascinating: one for being a depiction of a woman — which is uncommon to find in historical figurines in the region — and the other being of a male whose face is covered in white clay, as a mask.

Garcia believes, due to the way sculptures were placed, that they might be of significant social entities in historic times.

“It is common to find wood figures at Chan Chan, but what matters now is that we have found one right over there [in a funerary context],” Garcia told Andina News Agency.

So far, four wooden sculptures, a scepter, metal vessels, textiles, and winkle shells have been unearthed at the Chayhuac An (one of the nine walled enclosures of the Chan Chan citadel).

“We can infer they [figures] were used to mark tombs of important people. We’ve found metal vessels and a body we haven’t yet touched, alongside the sculpture. Similar individuals have been found at the entrance of other contexts,” explained Garcia.

Archaeologists are still in efforts to perfectly dig up the sculptures and place them in the historically-correct context.

Formerly the largest pre-Columbian city in South America, it was the capital city of the Kingdom of the Chimor before the Inca conquest in AD 1470.

Historically, the city was built on a 12.5 square mile area, with its center occupying a 3.7 square miles. The city earned its fame for being the largest adobe city in the world as all of its structures are built out of sun-dried mud.

The city is under great threat from heavy rains and floods which could take down the buildings due to their fragile nature.