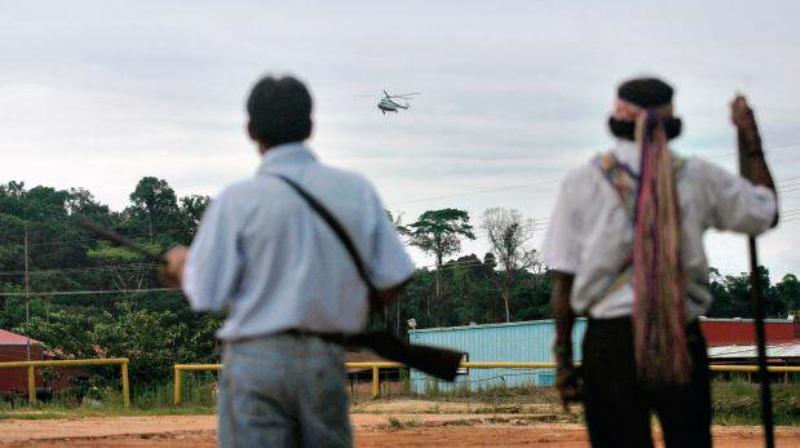 The recent kidnapping of seven oil workers by an indigenous tribe in Peru’s Amazon highlights the increasing frequency of kidnapping in negotiating with the state.

The hostages were released after five days when formal negotiations were established talks between community leaders and representatives from the government Cabinet, ombudsman and the Loreto state government.

The kidnapping of seven oil workers hardly registered among Peru’s most pressing news of the day. Detaining mining or oil company employees, health personnel and even police and military have become a common tactic used by communities to demand action from Peru’s national government.

In Loreto a tribe of Achuar natives in the Datem del Marañon province held four health workers for five days last April to demand more aid in combating a rabies outbreak among local bats. In the same province a different tribe detained a military helicopter and eight hostages in March to demand to be included in a government cleanup plan after this year’s oil pipeline spills in the Amazon.

Four police officers were held for one day in April after violent protests in the central state of Huancavelica during a local community’s demand for the opening of a university in Tayacaja province.

In September over 500 natives occupied oil block 192 installations in Loreto to demand the government meet with an indigenous federation over environmental concerns. Over 400 Pacific Stratus Energy workers were held during the standoff.

Around the same time in September, 40 tourists to the Amazon were kidnapped from boats on river tours in the Manu province of Madre de Dios. One of the kidnap victims was Duke University environmental scientist and MacArthur Fellow John Terborgh.

The villages which detained the tourists demanded the construction of a road in the Manu National Park. The national government’s environmental ministry had recently stopped the road’s construction by filing a complaint against Madre de Dios governor Luis Otsuka for building without the required environmental permits. The environment ministry says the road will serve illegal mining and logging industries.

Local residents of the communities surrounding the Las Bambas copper mine in Apurimac held nine contractors for several hours during the bloody protests which left three people dead last year.

Peru’s government did not charged anybody with kidnapping or coercion in any of the cases listed above. In some, the victims declined to press charges. The penalty for kidnapping in Peru is 20 to 30 years in prison. Coercion is punished by a maximum of two years in prison.

A former official in Peru’s culture ministry told El Comercio that these community protests result in kidnappings because the government takes a long time to fulfill its commitments, if at all.