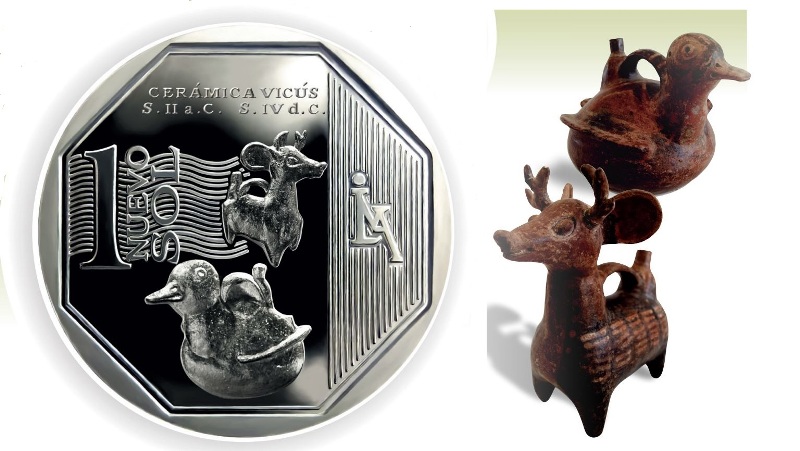 Peru’s central bank issued today a new sol coin which features the ceramic figures made by the Vicus culture.

The bank will issue 12 million of the coins featuring two of the most recognized pieces from the ceramic pottery of the Vicus culture which lived in Piura 2,000 years ago. One of the figures featured on the coin is a duck while the other resembles a dog with antlers.

“This pottery is characterized by it grotesque style that can be seen in the characters depicted, similar to the style also used the Moche culture,” reads the central bank’s statement about the new coin. “[The Vicus] ceramics feature animals, plants, scenes from everyday life and human faces like the Mochica portraits with traits of the people of Piura, similar to those in Guayas and Manabi in Ecuador.”

The Vicus culture lived along Peru’s northern coast near Ecuador from 200 B.C. to 400 A.D. Little is known about the civilization due to heavy looting over the years. However the Vicus is known for its ceramic figures.

The Vicus coin is the 23rd of what will eventually be 26 in the Wealth and Pride series. Other coins in the series highlight Machu Picchu, the Lima Cathedral, the Santa Catalina monastery in Arequipa and more. The last two coins issued in the series featured Moquegua architecture and the Huarautambo archaeological site in Pasco.