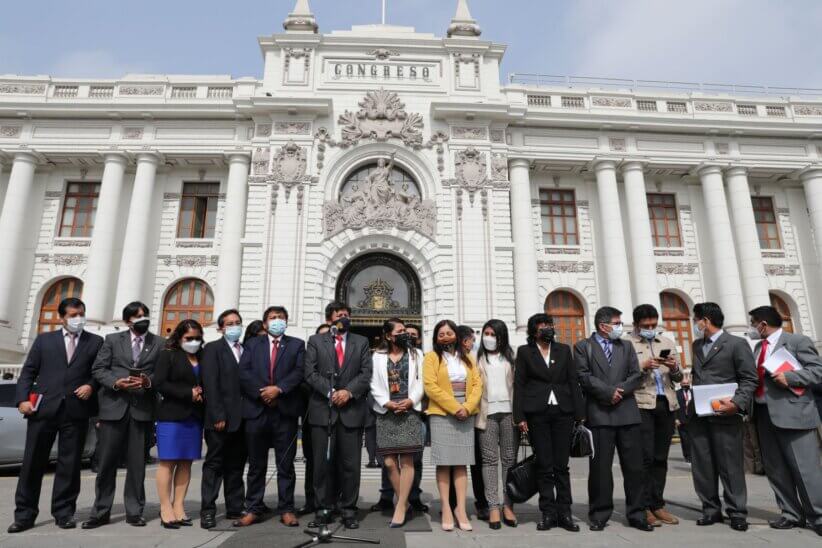 There is division in Peru’s ruling party. Ten congressmen from Peru Libre, the political party that led Pedro Castillo to the presidency, resigned on Tuesday due to internal disagreements.

The massive resignation occurred on May 10, after Congress elected six new magistrates to the Constitutional Court, replacing those whose mandate had already expired.

Unlike the other parties, Peru Libre voted dividedly in the election of the magistrates. The outgoing parliamentarians accused the rest of the Peru Libre caucus of making some decisions without consulting them. Several commenters pointed out that this topic was the straw that broke the camel’s back.

After the exodus, Peru Libre will have only 22 members, and will no longer be the leading political force in Congress. Now, Fuerza Popular, the political party led by Keiko Fujimori, assumes this position with 24 congressmen in parliament.

The 10 resigning legislators will form a new political group in Congress, whose name and spokespersons will be announced in the coming days, according to Katy Ugarte, one of the leaving members.

All the departing members belong to a group of professors who were invited by Mr. Pedro Castillo to join Peru Libre in the 2021 presidential elections. With the departure of this group, Peru Libre’s secretary general, Vladimir Cerrón, could lose influence in Congress. The 22 remaining congressmen remain loyal to him.

In December 2021, Peru Libre suffered a first crisis that caused the resignation of four congressmen. The first to leave was Guillermo Bermejo because he was not supported to censor the president of Congress, María del Carmen Alva. Shortly after, three other congressmen from the party resigned.

The ruling caucus began with 37 congressmen. In total, 15 of their members have since resigned.

Dissident legislator Katy Ugarte explained on Twitter that “the resignations occurred for reasons of conscience, due to political discrepancies and differences in the management of the ruling party.”

In a press conference Mrs. Ugarte assured that the resignation was not related to the election of the magistrates of the Constitutional Court.

“We analyzed this months ago. We have a clear position as teachers. We have a political project and based on it we are making this decision,” she said.

On the other hand, Mr. Cerrón minimized the departure of the 10 congressmen, pointing out that they are not militants and that they came as guests.

On Twitter, he said those who have resigned from the party  “are not leaving as a matter of principle” but rather are leaving for “their own interests.”

“The correlation of forces is not affected, they will continue to vote for Pedro Castillo, and we will too. Go ahead!” he wrote.