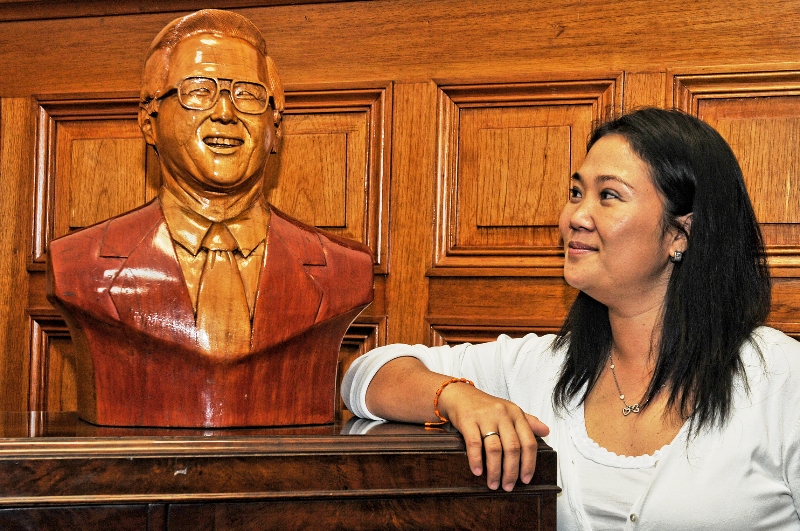 A report detailing visitors to former President Alberto Fujimori in prison has raised questions about his role in his daughter Keiko Fujimori’s presidential campaign.

An El Comercio report showed that Fujimori received 653 visits in less than three months from Aug. 1 to Oct. 28. While most prisoners receive visitors only on Wednesdays, Saturdays and Sundays, Fujimori is allowed visitors on those days as well as Mondays and Fridays. Given those numbers, Fujimori averages more than 10 visits per day.

The report cited visitors including local politicians in various regions from Puno to Lima as well as business leaders. Some of the visitors met with the former president to discuss their plans to run for office on the Popular Strength ticket and even to bring irrigation projects to their districts.

“I feel perfectly well,” Fujimori told El Comercio in an interview prior to the report. “I’m going to be strong for the campaign.”

The report has raised questions about how involved Fujimori is in the presidential campaign of his daughter, Keiko Fujimori, who leads the field of candidates in opinion polls.

“I personally direct the campaign,” Keiko Fujimori said on Cuarto Poder last night. “He does not participate in the campaign as they want to imply in the media. He doesn’t make decisions.”

However some political analysts say the former president’s high level of activity is indicative of his involvement in politics.

“He is strengthening ties and doing public relations,” said political scientist Eduardo Dargent. “This reinforces the image that Keiko Fujimori is second in command.”

“The Fujimori hardliners will like this,” says analyst Enrique Castillo. “They hope Keiko wins and pardons her father, who they have always wanted to see govern.”

Meanwhile, Ipsos Peru director Alfredo Torres explains that there is a power struggle in the Popular Strength camp between the old hardliners who backed Alberto Fujimori and the moderate members who identify with his daughter.

“What is at stake here is the list for seats in Congress,” Torres said. “I think that Alberto Fujimori is trying to back his people so they can be legislators.”

“Her support for hardline Fujimorismo will be important too,” Torres added. “Speaking in very rough terms, half of her support from hardcore Albert, and half was built by her and is a bit more moderate. She cannot break completely with the hard line because it could lead to a split.”

Alberto Fujimori is currently serving a 25-year prison sentence for corruption and crimes against humanity which include the murder of 25 people. While he has been in prison since 2007, he remains popular as the public credits him for Peru’s economic transformation and improved security.

Keiko Fujimori leads opinion polls with 35% of the vote according to Ipsos. Pedro Pablo Kuczynski is the closest competitor with 14%.