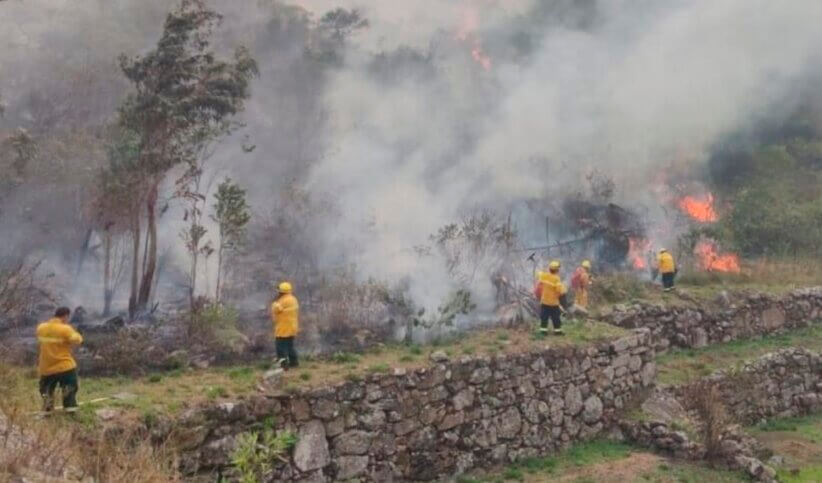 The fire spread due to the wind. Image courtesy of the Municipality of Machu Picchu

A wildfire in Machu Picchu destroyed 40 hectares (98 acres) of vegetation close to Peru’s most popular tourist destination. The ancient Incan ruins were not damaged and there was no loss of human life, according to local officials.

The fire started on June 28 about 10 kilometers away from the park and was brought under control by July 1, local media reported. Tourist activity in the area was not affected by the blaze.

The fire began in the community of San Antonio de Torontoy, at kilometer 95 of the Ollantaytambo-Machu Picchu railway, and spread to the Incan archaeological monument of Llamakancha, located within the Machu Picchu archaeological park.

According to Cusco’s Decentralized Directorate of Culture, the patrimonial damage in this sector is still being assessed. However, thanks to swift  intervention of the firefighters and regular fire prevention work in the area  around the monument, the impact is expected to be minimal.

Authorities announced that the  fire was allegedly started by a local resident who was burning waste and brush on his land. Authorities also pointed out the difficult terrain the fire brigade faced, making access to the fire almost inaccessible at first.

Forest firefighters and members of the National Police, the National Service of Natural Protected Areas by the State (Sernanp), the Ministry of Culture, the Municipal Police and the Civil Defense Institute (Indeci), all reported to the scene.

Director of the Cusco Regional Emergency Operations Center (Coer), Roberto Abarca, told La República on July 2 that this year the fires in Cusco have already destroyed some 200 hectares (494 acres) of vegetation.

“We’re calling on all mayors.– They know their realities, the most vulnerable places, where the fires occur, the behavior of their populations — to take action to avoid consequences like in years past,” he said.