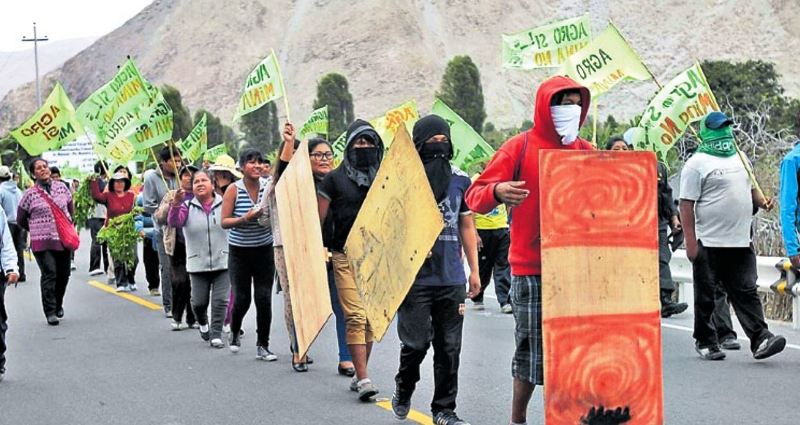 Opposition to the Tia Maria copper project in Arequipa held a 72-hour strike in which protesters blocked a key highway on Thursday and Friday.

Opponents to Southern Copper’s $1.4 billion copper mine in the Tambo valley of Arequipa’s Islay province announced the protest last week. While the first day of the strike was uneventful, hundreds of protesters blocked the Panamericana Sur highway for three hours on Thursday and four hours on Friday.

The third day also saw the reappearance of the “Tambo Spartans,” a group of masked protesters which fight police armed with wooden shields and slings for launching rocks. Violent confrontations between police and protesters between March and May killed four, including one police officer, and injured hundreds.

Protest leader Augusto Paredes during Southern Copper’s renewed attempts to convince the population that the Tia Maria copper mine will not affect local crops or the water supply.

The fresh protests come on the last day of the annual Perumin mining conference held in the city of Arequipa, about 60 miles inland from the Islay province.

“The opposition, it appears to us, is increasingly smaller and we hope it will continue to decrease and they they’ll accept negotiations,” said Southern Copper president Oscar Gonzalez. “If [the mine] isn’t started this year, it will or it should get started next year.” Gonzalez added that 85% of the local residents have accepted the details of Southern’s outreach.

An indefinite strike which started in March against the Tia Maria project resulted in four deaths, prompting the President to declare martial law in the Islay province of Arequipa. Peace was restored and the emergency expired in July, but hundreds of police and military remain in the region.