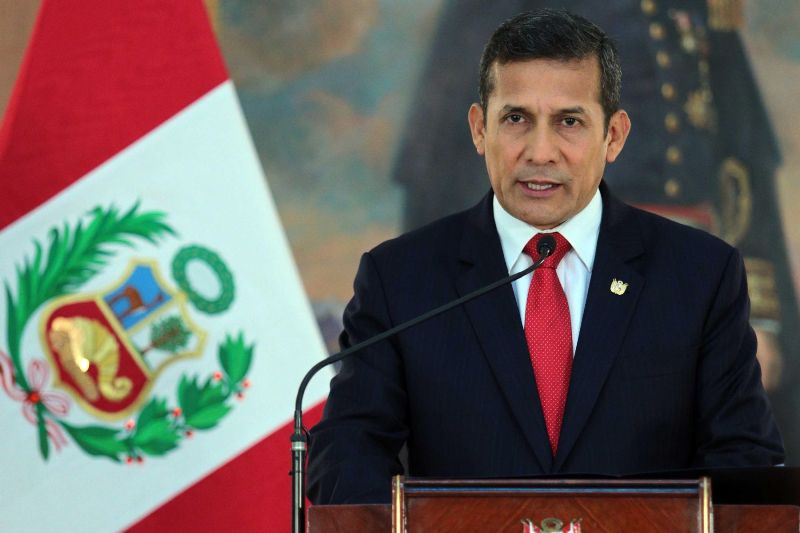 Ollanta Humala is a former president of Peru.

Humala was born in the department of Ayacucho to a family well-known for its leftist politics. His father, Isaac Humala, worked as a lawyer for organized labor concerns and was a member of the Communist Party of Peru. Isaac Humala is also the figurehead for “Etnocacerismo,” an ideology that advocates for indigenous rights and empowerment of the Peruvian military. The word combines “ethnic” and “Caceres,” the name of Peruvian general Andres Avelino Caceres, who led the expulsion of the Chileans from Peru in the War of the Pacific.

Despite its identification with indigenous roots and militarism, ethnocacerism did not ally with the Shining Path, fighting against both the Maoist guerrillas throughout that armed conflict as well as Ecuador during the Cenepa War. Etnocacerismo is better defined by a staunch opposition to corruption in the military.

Ollanta Humala was sent to Lima for high school before enrolling in the National Agrarian University. From there, he transferred to the historic Chorrillos Military School, where he graduated in 1982 as a junior officer. Humala went on to study political science at Pontifical Catholic University of Peru, national defense at the Center of Higher Military Studies and international law at the University of Paris.

In 1992, Humala was sent to Tingo Maria to fight Shining Path guerrilla rebels. In 1995, he fought against Ecuador in the Cenepa War.

In 2000 as lieutenant colonel, Ollanta Humala led a revolt near Tacna against Alberto Fujimori’s government on the grounds of widespread corruption. Humala took action when disgraced intelligence chief Vladimiro Montesinos returned to Peru with impunity. Most of Humala’s 50 soldiers deserted him within a week, but hundreds of others began trekking to Tacna in support of his cause, which appealed to their ethnocacerist sympathies.

That same year Fujimori’s government fell after publicized proof of corruption. Humala was redeemed and regarded a patriot, receiving a congressional pardon for his actions. In 2004, President Alejandro Toledo sent him to France as military attache.

In 2005, Ollanta Humala’s brother and hundreds of armed followers seized a police station in Andahuaylas in the Apurimac department, taking seventeen soldiers and police officers hostage. They demanded the resignation of President Toledo for corruption based on negotiated terms with Chilean mining concerns. After the small rebellion was put down, in which four police officers were killed, Auntauro Humala was jailed and Ollanta Humala forcibly retired from the military.

But Humala still enjoyed strong support in an era of empowerment for the underclasses in Latin America. In 2005, he ran for President on the Peruvian Nationalist Party ticket. He was openly endorsed by Venezuelan President Hugo Chavez, and evidence shows that Chavez helped financ Humala’s campaign. Ollanta Humala gained enough votes to warrant a run-off election, in which he was defeated by APRA party candidate, Alan Garcia.

In 2011, Humala ran for the presidency again, this time distancing himself from the policies of Hugo Chavez. Instead, he likened himself to center-left President of Brazil, Luis Inacio Lula da Silva. Ollanta’s primary competition was imprisoned  former president Alberto Fujimori’s daughter, Keiko Fujimori. Despite his imprisonment for corruption, Alberto Fujimori is credited with defeating the Shining Path and enjoys wide support today.

Humala’s campaign promised to demand higher royalties from mining companies and reduce poverty and inequality. Humala beat Fujimori with just over 51% of the vote.

The day after Humala’s victory, the Lima Stock Exchange shares fell 12%, the deepest drop in Peruvian history. Humala reached out to the business community by committing to respect investors’ rights and the rule of law. While Humala has placated the business community, he has outraged some on the left. Humala’s presidency has tried to balance the expectations of change while maintaining investor confidence and the country’s rapid economic growth.

Humala railed against mining companies during his political campaign, but after election courted investment. In doing so, he has alienated much of his base and replaced leftist cabinet members with military allies.

Soon after being sworn in, Humala faced his first major challenge. Newton Mining, an American firm, announced a gold and copper operation in Cajamarcas which would pay $3 billion in taxes to the Peruvian government over 19 years. Despite Humala’s raising of taxes on mining companies as well as a new law requiring they consult with local communities before proceeding, the Conga Mining Project has caused violent protests.

In addition to his policies not meeting expectations of his base, Humala’s administration has been marred by corruption allegations. First lady Nadine Heredia is at the center of various financial irregularities. His 2006 campaign manager, Martin Belaunde, is at the center of the high-profile La Centralita corruption scandal in Ancash department. Humala has shuffled his cabinet so many times the total number of ministers would be difficult to count.

Given the policies not meeting the expectations of his political base and the dizzying array of corruption scandals, Humala’s approval ratings are the lowest in Latin America. However, neither GDP nor foreign direct investment has suffered and Peru is generally regarded to be continuing the decades-long improvement of its business environment.