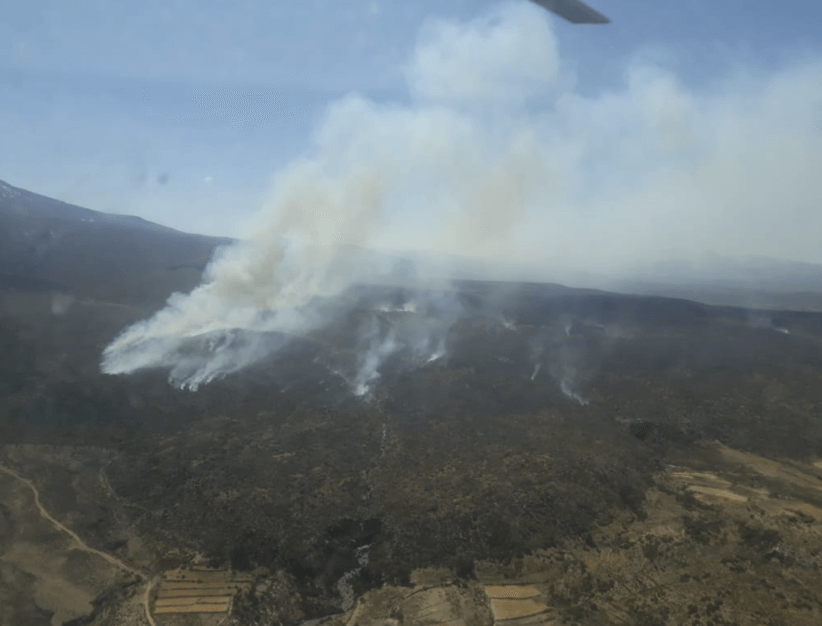 A forest fire that began on Sunday in Peru’s southern region of Moquegua has spread to Arequipa. On Tuesday, the Center for National Emergency Operations (COEN) released a statement via its social media outlets that official helicopters were using Bambi Buckets, suspended water buckets, to prevent the fire’s spread.

According to news agency Andina, more than 11 hectares of forest is burning in the Arequipa districts of Agua Buena, Totorani and Pichu Picchu, as well as in the Talamolle district of Moquegua, where the fire originated.

COEN published a map of the current fires on Tuesday afternoon that show the areas seeing the most damage:

As shown on the map, the fire is located in a half-circle around the rim of Pichu Pichu Volcano.

The Peruvian Air Force, the National Police and the country’s Army are also helping to suffocate the fire. According to Andina, the regional government of Arequipa has also sent tools and equipment necessary for fighting fires.

Per a report from Spanish-speaking outlet La Republica on Monday, firefighters had yet to gain any control on the raging fire.

Though regional authorities have reported lands of up to 180 hectares being damaged, there are not believed to be any people or crops affected yet.

Peru and Germany look towards accords to protect Amazon rainforest