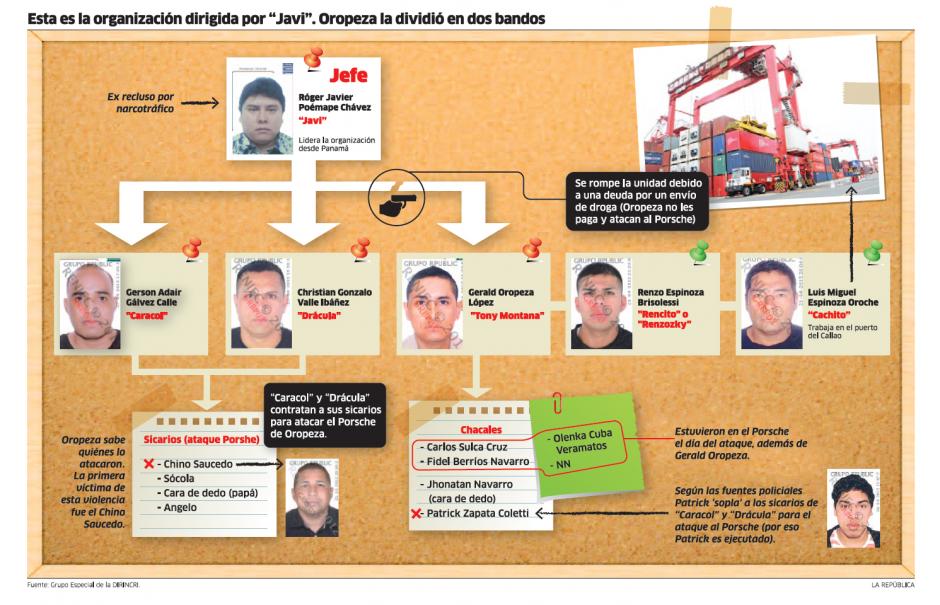 Gerald Oropeza was Peru’s most wanted fugitive when he was arrested in Ecuador and extradited to Peru on Sunday for money laundering and drug trafficking charges.

Nicknamed “Tony Montana,” Oropeza is accused of being one of Peru’s larger drug traffickers, obtaining cocaine from the VRAEM and shipping it in containers through the port of Callao to the Ndrangheta mafia in Italy.

Oropeza drew the attention of police and the nation on the evening of April 1, when his Porsche Cayenne SUV was ambushed in San Miguel. He and three friends left the airport after returning from Cancun when a team of five assailants unleashed a hail of bullets and a grenade on the car.

Oropeza suffered a bullet in his foot. Two others were also wounded before escaping. Their assailants then set fire to the luxury truck with Molotov cocktails.

After the attack, police assumed the assault on the $200,000 vehicle was drug-related, a suspicion confirmed when they reviewed messages on Oropeza’s cell phone, which he left behind. The ensuing publicity made Oropeza a household name throughout Peru.

With statements from informants, investigators developed a theory that the attack stemmed from a debt Oropeza owed to other traffickers in Lima.

Oropeza was allegedly one of three lieutenants under the Roger “Javi” Poemape, who directs operations from Panama. Two other lieutenants, Gerson “Caracol” Galvez and Christian “Dracula” Valle, are suspected of orchestrating the attack on Oropeza.

Soon after the incident, the press revealed that Oropeza lived in a $5 million mansion in the posh La Molina suburb of Lima. Surprisingly, the home is property of the Peruvian government after having been seized from former TV mogul Jose Crousillat for corruption charges.

While there is no clear explanation how Oropeza came to live there, APRA party official Angel Vera seems to have assigned administrative possession of the 40-room house with a pool to a friend of Oropeza.

The discovery of the La Molina home raised questions about Oropeza’s connections with the APRA political party. Oropeza managed three companies which received over 59 contracts from government entities worth over $67 million during the government of Alan Garcia.

One of the companies was founded by Oropeza’s father, Americo Oropeza a career APRA member who was murdered in 2011. Oropeza’s lawyer was Miguel Chinguel, who is currently jailed in connection with the “narco-pardons” scandal which Oropeza is suspected of being involved in as well.

Prosecutors filed money laundering charges when they learned Oropeza’s official salary was less than $4,000 per month while more than $150,000 moved in and out of his personal bank account.

Investigators believe Oropeza left the money-laundering business when the APRA party lost power and began trafficking cocaine with contacts in the VRAEM, the port of Callao and Italy.

Oropeza fled the country before an arrest warrant was issued in the following weeks. Soon afterward, Oropeza’s close friend Patrick Zapata was found dead in San Martin de Porres. Authorities believe Zapata was murdered because he had made a statement to police after the attack on Oropeza’s Porsche.

Ever since the April 1 attack, the media in Peru have publicized Oropeza’s lavish lifestyle. Tabloids have published pictures of him with models, videos of private parties including one featuring reggaeton stars Trebol Clan as well as pictures and footage of his main hobby, auto racing. Oropeza owned over $500,000 of cars including a Ferrari, an Audi and at least two Porsches.

Oropeza was sentenced to 18 months of preventive jailing pending investigations into drug trafficking and money laundering. He is being held in segregated housing as authorities presume both Peruvian and Italian mafias have open contracts for his murder.

Political row over firing of high-profile journalist in Peru