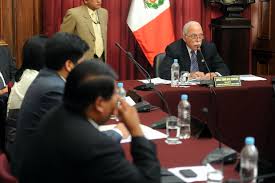 Congressman Carlos Tubino has proposed a new law that would make religious defamation a criminal offense that would attract jail time. The controversial measure, that was advanced by the elderly Tubino, was presented last Wednesday and received the support of many other Fuerza Popular members.

The law incorporates any offence against religious liberty within the penal code, making acts that offend or insult religious figures criminal offences that will attract a criminal sentence. The measure dictates that anyone who “who, without lawful right, offends, slights, insults or harms another’s religious freedom, will be imprisoned for no less than two years nor more than 4 years.”

The law also goes on to inflict even more punitive measures (up to 15 years) on crimes against religious individuals if they are harmed physically or are killed as a result of their beliefs. Punishments of up to 4 years can be doled out in the event that property belonging to religious organisations have been vandalised or destroyed.

In crafting the law, Tubino appealed to the religious liberty provisions of the Universal Declaration of Human Rights as well as the Constitution of Peru. Article 2(3) of the Constitution stipulates that “no person shall be persecuted on the basis of his ideas or beliefs.”

Peru is still largely a Catholic country, with over over 85% identifying with the denomination. As evidence of the importance of the tradition in Peru, the Pope’s recent visit commanded millions of viewers in the Andean country alone, whereby his every move had been charted and reported on.

The law also follows the opening of a Spanish exhibition in Peru that poses young gay men and transsexuals in religious garb and iconography. Intended to raise awareness of hate crimes against the LGBTQI community, the exhibition (entitled ‘Canon’) was funded by the Spanish government and attracted fierce media criticism.

The law on religious defamation follows another controversial measure that is currently being mooted before Congress, whereby students of technical universities are being stripped of their employment rights and, in many cases, being made to work for free. However, unlike the ‘youth slavery’ law as it is called, the law proposing criminal sanctions against religious insults has not been met with furious protest on the streets of Peru. Instead, the Twitterverse has responded by offering their own religious insults in response to the strict law. Under the the hashtag ‘An offensive meme for Tubino” (#UnMemeOfensivoParaTubino) many tweeters flouted the proposed law by poking fun at the Fuerza Popular lawmaker.