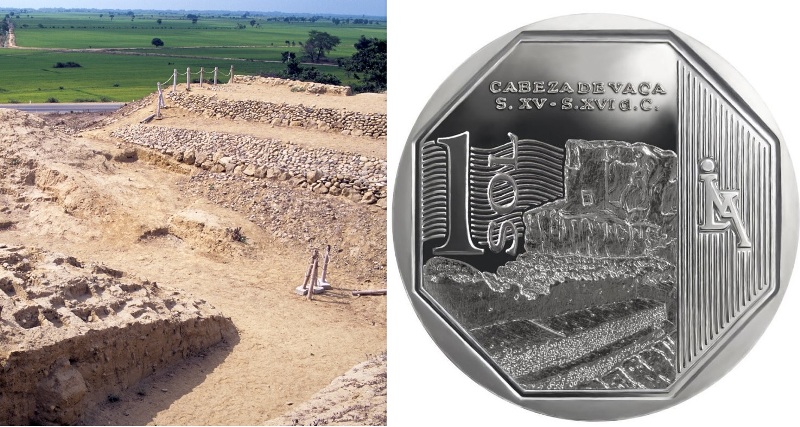 The bank will issue 12 million of the coins featuring the ruins of the city built in the 15th century which served as a hub to connect the Pacific Coast with the Inca’s Qhapaq Ñan road system.

“Tupac Yupanqui annexed the region of Tumbes into the Inca empire and ordered the so-called architecture of power to be built in Cabeza de Vaca,” writes culture ministry official in Tumbes, Carolina Vilchez.

“As in other provincial capitals of the Inca empire, [this included] the temple of the sun, the acllahuasi [harem], a ceremonial plaza, textile workshops and warehouses. These beautiful buildings of mud and stone were described by the chroniclers who arrived with Francisco Pizarro in 1528 and 1532.”

Vilchez says that the Cabeza de Vaca was a key port for the Incas’ control of fishing products including the Spondylus mollusk, also known as the spiny oyster. Located in the Corrales district of Tumbes, Cabeza de Vaca was one of the first Inca settlements visited by Spanish conquistador Francisco Pizarro in the conquest of the Inca empire.

The Cabeza de Vaca coin is the 24th of what will eventually be 26 in the Wealth and Pride series. Other coins in the series highlight Machu Picchu, the Lima cathedral, the Santa Catalina monastery in Arequipa and more. The last two coins issued in the series featured the Vicus ceramic pottery in Piura and Moquegua architecture.

Tens of thousands march against Keiko Fujimori in Lima