Heavy floods in northern Peru, some call for suspending Pan Am Games 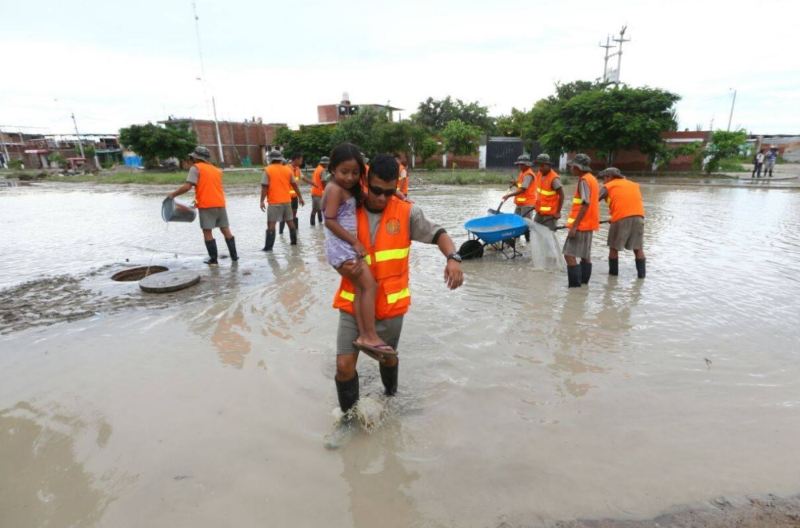 Devastation caused by heavy flooding in Peru’s northern state of Piura has led to mayoral condemnation over failing investments in disaster prevention.

On his visit accompanied by prime minister Fernando Zavala, President Pedro Pablo Kuczynski announced that April will see the reconstruction of the bridge in the La Manuela gorge which has seen multiple floodings. He also took the opportunity to criticize local mayor Oscar Miranda.

“Next time vote for a better mayor, that’s what I’d tell (the population). If they do not like the mayor, the election next year they will vote for a good mayor, and if they have not seen their mayor then they have to revoke him,” Kuczynski told reporters.

Zavala also stated that the government has allocated over $150 million for national disaster prevention, but that Piura “will need a special budget.”

Kuczynski, Zavala and other ministers had intended to visit the Los Polvorines and Las Dalias sectors, but their itinerary was cut short due to angry protesters who followed the group throughout their visit.

Piura is not the only city affected in the region. In Paita 600 were left homeless and a further 40,000 suffered flooding but could still feed themselves. Mayor Reymundo Dioses told El Comercio that 100 heavy machines are needed to restore roads. The transport ministry responded by sending specialized vehicles to the worst affected areas.

Criticizing the government’s handling of the crisis, the mayor of Lima’s San Isidro district, Manuel Velarde has joined a list with other authorities backing a proposal to suspend Lima’s hosting of the 2019 Pan American Games. It states that funding should be diverted to rebuilding the devastation zone.

Velarde joins a list of leaders proposing to suspend the 2019 Pan American Games and reorient the resources destined to the construction of sporting facilities to areas hit by the rains in the north of the country including the states of Piura, Lambayeque and La Libertad.

“The Executive must prioritize spending to help the victims. We propose the suspension of the Pan American Games in the capital scheduled for 2019, in order that this budget be destined to the integral recovery of all the affected areas. Brothers and sisters, let us make hope in the state,” Velarde posted on Facebook.

Kuczynski rejected the proposal, saying the government already has sufficient resources to rebuild the affected areas and that Peru should stand by it’s international commitments.

“Peru has accepted to be the host for the Pan American Games in a competition where we beat other countries. It would really be a tragedy if we cannot meet [our responsibility],” Kuczynski said in a press conference.

The education ministry stated that $1.2 billion has been allocated to pay for the Games in 2019.