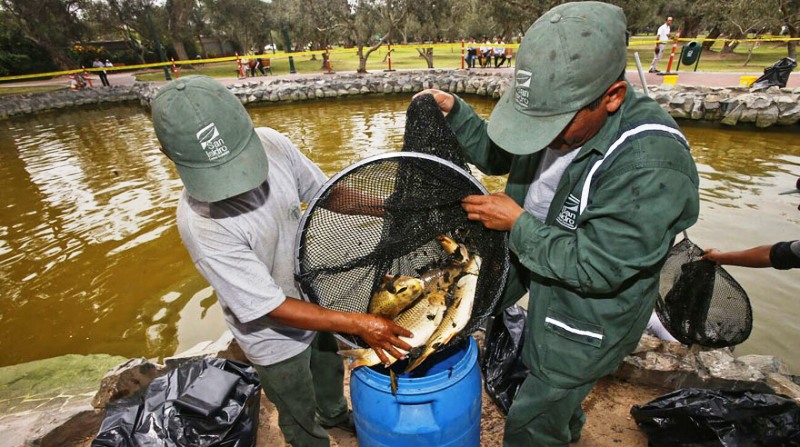 Over 200 fish were found dead in the pond of El Olivar park in Lima’s San Isidro district this morning.

Joggers and walkers in San Isidro’s Parque El Olivar were horrified to see hundreds of fish floating in brown water early this morning at the manmade pond in one of the city’s nicest parks located a short walk from Lima’s financial district. Visitors alerted park authorities, who began a cleanup effort to remove the dead fish.

The dead fish included guppies, tilapia and carp. Some 50 carp and tilapia were saved along with three turtles. The district is offering the rescued fish for adoption.

“This must have been produced by a very strong agent, for a poisonous substance to cause the deaths of hundreds of fish in just a few hours,” a veterinarian with San Isidro’s animal welfare agency told Peru 21.

In statements to El Comercio, San Isidro mayor Manuel Velarde accused one of the companies the district contracts for the park’s cleaning and lawncare as being responsible for the “ecological attack.”

“It is highly suspicious that this happens the same day the garbage-collection license with [Innova Ambiental) ends,” Velarde said. “This must be a very thorough, technical and professional investigation.”

Innova Ambiental is currently in civil litigation with the city of San Isidro over a $6.4 million payment. The company denies that it had any role in the poisoning of the fish.

“In the area of green spaces our services in the municipality of San Isidro are limited to the maintenance of parks and gardens. We are not responsible for maintaining the ponds and / or the feeding of fish and other species, work which the municipality of San Isidro is exclusively responsible for,” Innova Ambiental said in a statement. “We are taking legal steps to seek compensation for damage caused to the image and reputation of our company.”

In addition to testing the pond water to determine the poison used, police are also reviewing video taken from camera’s at San Isidro’s municipal library nearby. Under Peruvian law, crimes against the environment and the new animal cruelty law are punished with up to six and five years respectively.