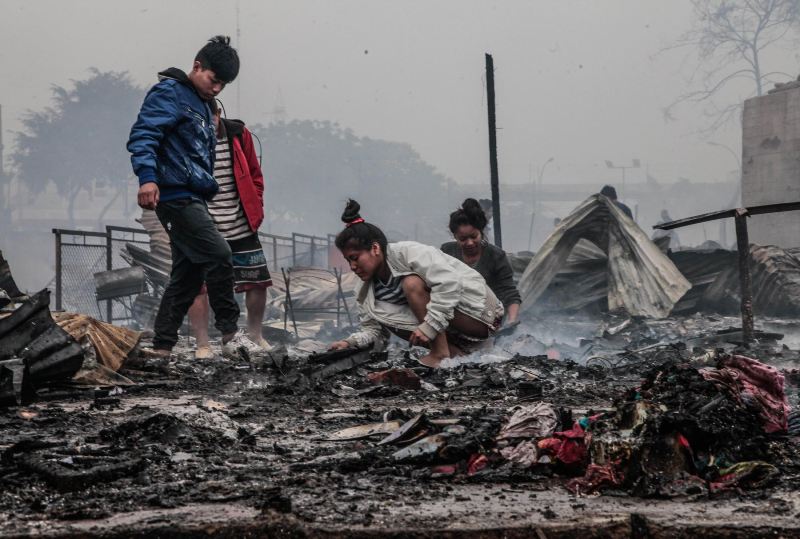 A fire on early Friday morning destroyed the Cantagallo shantytown settled by natives from the Amazon jungle in the Rimac district near downtown Lima.

Hundreds of homes were consumed in the fire reportedly started near a workshop which used flammable chemicals to produce clothes and luggage. The Cantagallo community was built by Shipibo-Konibo migrants from Ucayali in 2001 on the banks of the Rimac River just blocks from Lima’s historic city center, Government Palace and city hall.

The fire started just after midnight and quickly consumed the mostly wooden homes of Lima’s only neighborhood of Amazon native before firefighters brought the blaze under control around 6 a.m. Peru’s ombudsman said that over 400 homes had been destroyed, leaving over 2,000 people homeless.

Aside from one child who suffered third-degree burns on over half of her body, there were no injuries reported. Dozens were treated for smoke inhalation.

“What hurts most are the memories. I lost everything in this fire that went through Cantagallo,” one woman told La Republica.

“In 20 minutes my whole life was burned up,” said another resident. “I have nothing left. Even the clothes I’m wearing are borrowed.”

Lima mayor Luis Castañeda on Friday said that the city would relocate the community to the Barrios Altos neighborhood east of downtown and provide hundreds of tents and beds. But community leaders have said they don’t want to move. Delmer Ramirez, vice president of Cantagallo’s resident association, told La Repulica that Barrios Altos is dangerous.

“We don’t need charity from the government,” Ramirez said. “We want to reorganize and rebuild our homes. We’re not going to move from Cantagallo. We will resist. In the morning the mayor prepared tents in [Barrios Altos], but we’re not going.”

Police official Jorge Padilla told La Republica that many of the Cantagallo residents stole electricity from nearby light posts, some of which conducted up to 10,000 watts of power. While some people tried to identify the source of the fire, others highlighted that the city has always known the dangers of the shantytown and laid blame on Castañeda for cancelling a plan to relocate the community.

Castañeda cancelled plans designed by previous mayor Susana Villaran to build a 60-acre park along the Rimac River. The project required relocating the Shipibo community to Lima’s northern district of San Juan de Lurigancho. Castañeda modified the contracts in order to use the funds for the construction of a controversial underground tunnel to streamline traffic at 28 de Julio and Arequipa avenues.

“Solidarity with the Shipibo community of Cantagallo. They could have been relocated, it was planned and paid for but Castañeda cancelled everything,” Broad Front leader Veronika Mendoza tweeted.

“And if [Castañeda] previously denied them the possibility of living in decent housing which would have prevented this tragedy, now he gives them tents. Also water, blankets, food and security guards,” Pedro Ortiz writes in El Comercio.

The condemnations of Castañeda’s cancelling the community’s relocation come less than one week after the mayor was subpoenaed by investigators looking into his administration’s hiring of Brazilian construction firm, OAS, for the 28 de Julio bypass. The mayor’s contact with the company was sentenced to 16 years in prison in Brazil in the Carwash corruption probe.

Protest against gold mine leaves one dead in northern Peru