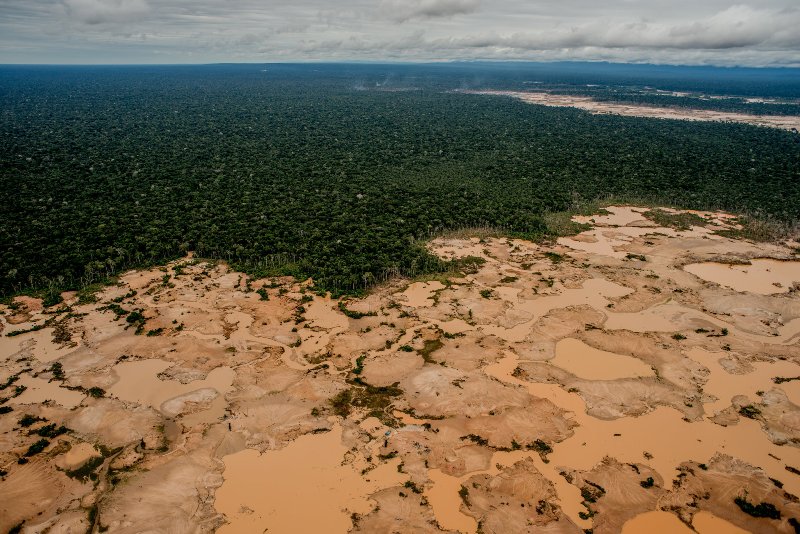 Peru’s failure to stop illegal mining in Madre de Dios has lead to sustained deforestation and pollution in the Tambopata National Reserve of the Amazon jungle.

An Amazon conservation group released satellite images revealing the devastation caused on a stretch of the Malinowski River from May to July this year.  The images show deforestation across an area of 712 acres in the Tambopata reserve of Madre de Dios state, which has been under a health emergency since May due to mercury contamination.

“All living soil structure is eliminated, which makes it impossible for vegetation to grow. The river’s course has been modified and altered the natural habitats of migratory fish species,” Sidney Novoa, a technician for the Association of Conservation for the Amazon Basin (ACCA), told El Comercio.

According to a report by the Carnegie Science Institute, Peru’s annual rate of deforestation has tripled since the global financial crisis in 2008 and the subsequent rocketing in the price of gold. The endless supply of illegal miners is taking a devastating toll on one of the most biodiverse places on the planet.

“They are getting 12 to 18 grams a day,” Tambopata reserve overseer Victor Macedo told the New York Times. “They are getting 60 to 80 in the buffer zone and 150 to 200 in the reserve. The miners care more about that than they do about what happens to Tambopata.”

While the price of black-market gold can vary, the average of $30 per gram makes a bad day in illegal mining worth significantly more than an entire month of labor at Peru’s minimum monthly wage is $257.

Tambopata was untouched a year ago, however a lack of government resources has meant a steep decline in patrols. The Chief of  the National Service of Protected Natural Areas (Sernap) Pedro Gamboa told El Comercio that 15 marines were stationed at a watch-post to disrupt illegal mining activities. However now they are only rangers.

A report by the Global Initiative Against Transnational Organized Crime (GIATOC) stated that gold mining is being increasingly taken over by organized crime groups and that 28% of the nation’s gold comes from illegal sources. This percentage accounted for $1 billion in just 9 months of 2014.

Thirty tons of mercury are dumped in rivers across Peru every year. Within the Madre de Dios province alone 40% of people across 97 villages were found to have dangerous levels of mercury in their bodies. Miners use mercury because it binds with gold to form amalgam which is easier to extract.

Local communities are especially vulnerable due to their reliance on rivers for food and water. Mercury poisoning can cause chronic headaches, kidney damage and permanent brain damage in children.

“The next generation will pay for what we are doing now,” environment minister Manuel Pulgar told reporters.

After his inauguration in July, Peru’s President Pedro Pablo Kuczynski has been touring the country and visited Madre de Dios on Monday.

“We do not propose violence, forced or otherwise, but of course there has to be discipline within a country. I seek a consensus around which you can all work,” he later told local mining chiefs.

Last December saw protests in the region lasting over a week bringing the state capital Puerto Maldonado to a standstill. The dispute was over two laws put into place by then president Ollanta Humala to crackdown on illegal mining.

“It does not bother me, a bit of smuggling,” he said previously. He has since retracted that statement.