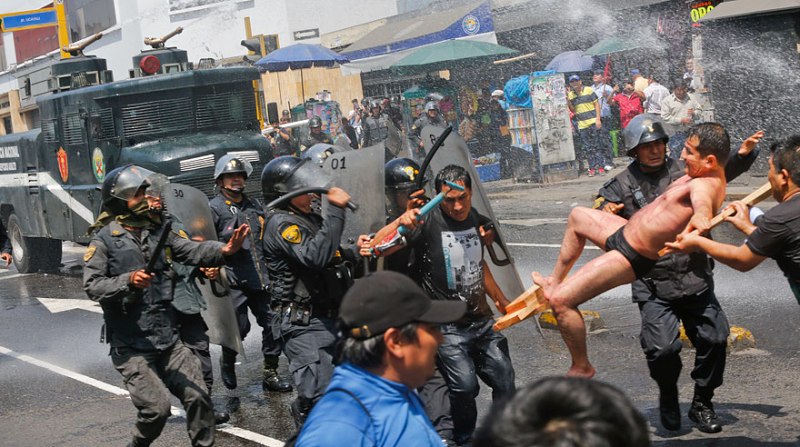 Peru’s judicial employees union held a protest in downtown Lima yesterday which ended in clashes with police outside Congress.

Hundreds of judicial employees marched from downtown Lima’s Plaza San Martin toward Congress, where they blocked Abancay avenue for an hour. The march created paralyzing congestion throughout the district.

Blocking the key thoroughfare led to clashes between protesters and police who used tear gas, water cannons and batons to clear the road. Police arrested two from the crowd which included judicial employees as well as other government employees demanding higher wages.

“The average monthly salary of a judicial employee varies between $500 and $740, while in organizations like the supreme court and the judges board they earn as much as $1,500,” said Cinthia Baquerizo, secretary general of the judicial employees union.

The judicial employees started an indefinite strike two weeks ago to protest their $1.8 billion budget from the finance ministry in 2016. Judicial Power president Victor Ticona had requested $2.9 billion to continue the battle against corruption and modernize the judiciary. Ticona will speak before Congress today to demand a minimum increase of $121 million.

Thousands of legal proceedings have been held up nationwide due to the strike.

The judicial employees are also demanding an exemption from Peru’s “Service Law,” which establishes a protocol to fire public employees who do not perform well in evaluations.