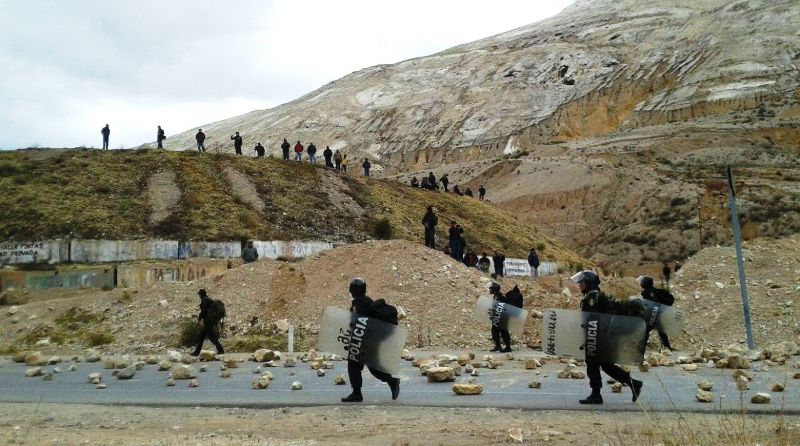 Peru’s government has rejected calls for an easing of environmental standards at the La Oroya smelter in Junin after violent mineworker protests yesterday.

The mineworkers’ claim that that rigid environmental standards prevented potential buyers from bidding in a public auction of Doe Run Peru’s smelter. They are asking the government to bring the smelter’s emission standards in line with those of Chile, which allow over three times as much sulfur dioxide per cubic meter.

However Peru’s environment minister Manuel Pulgar announced that the government would not consider easing the emissions regulations in an area considered one of the most polluted places in the world.

“It’s a perfectly reasonable standard. The (standard) from 2001 cannot be changed because of litigation and because the state is responsible for protecting people’s health,” Pulgar said on RPP. “If we give an operator greater flexibility than what was demanded from Renco, the Peruvian government will lose a $500 million lawsuit.”

“We have to find labor alternatives because flexibile [environment standards] is not a solution,” Pulgar said. “I do not believe that we as citizens are willing to assume that, because of a labor issue we will allow (pollution) to be emitted.”

Renco Group, the holding company which owns the bankrupt Doe Run Peru, filed a 2010 lawsuit with the World Bank’s international arbitration body against the Peruvian government for breach of contract. Renco alleges that most of the pollution in the La Oroya area was caused in the 75 years the smelter was operated before being acquired by Doe Run.

Renco claims that Doe Run spent over $300 million to reduce pollution in La Oroya by 50%, but that the Peruvian government did not fulfill its mutual cleanup obligations outlined in the original privatization agreement from 1997.

However the local labor union points out that over 2,500 jobs will be lost if the Cobriza copper mine and La Oroya smelter are closed, which the asset management company announced it will do this month after the asset auction received no bids.

“The government issues the standards and is the largest creditor among the board of creditors. I blame the interior ministry for everything that has happened in La Oroya,” said Yauli provincial mayor Carlos Arredondo. “It seems that we are talking about an insensitive government that does not understand the request of the people.”

Mining and energy minister Rosa Ortiz held a meeting in Lima today with representatives from Peru’s environment ministry, the Doe Run board of creditors and the company’s labor union, as well as the Junin state governor, a Junin congressman and the Yauli provincial mayor.

After the meeting Ortiz announced the creation of a technical committee to search for a way to keep the Cobriza copper mine and La Oroya smelter in operation.

“I call upon all people. We’re all on the same page. We all want to achieve the same result,” Ortiz said after the meeting today. “Therefore, we are going to sit down starting tomorrow to achieve this result. I ask that you talk to your representatives, listen, and today let’s end [the protests].”

Interior minister Jose Luis Perez announced that the police officer who fired his gun at protesters has been identified and suspended. Forensics exams will determine whether his gun fired the bullets which killed one and injured five yesterday.