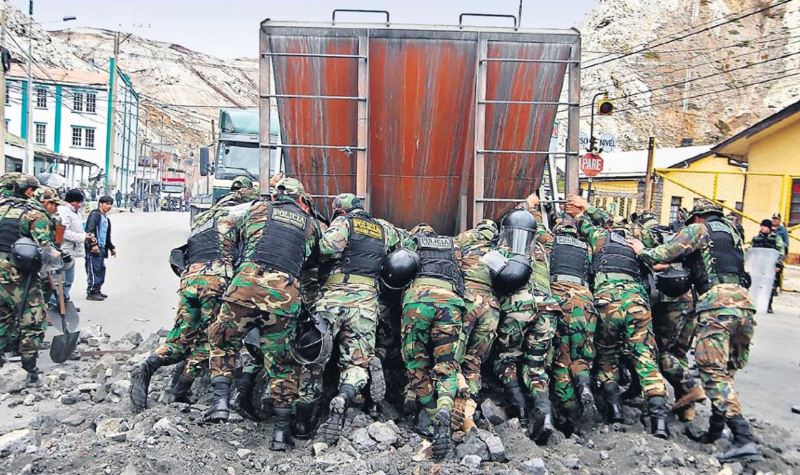 Mineworkers have lifted an indefinite strike in La Oroya, unblocking the Carretera Cental highway in Junin state after two days of unrest.

While Peru’s government rejected protesters’ demands to ease the legal limit on sulfur dioxide emissions for the La Oroya smelter, a meeting in Lima yesterday between representatives from President Ollanta Humala’s government an labor representatives, Junin politicians and Doe Run creditors agreed to find a way to keep the complex open and its workers employed.

Labor leaders announced an eight-day suspension of the indefinite strike pending a decision from the technical committee formed by the government to find a solution to keep the La Oroya smelter operational.

Peru’s ministers of environment and mining and energy refused to relax the sulfur dioxide emissions limit, which would expose the government to over $500 million in an international lawsuit with Doe Run. At 80 micrograms per cubic feet, Peru’s emissions cap is one of the strictest in the world. By comparison, the respective caps in Chile and Colombia are 250 and 400.

“We don’t want a simple liquidation [of Doe Run’s assets],” said Luis Castillo, head of the La Oroya labor union. “We want the right of workers to be respected, and that the law respect the La Oroya [smelter] and the Cobriza mine.”

Castillo said that easing the emissions limit was not the only solution to making La Oroya an attractive investment. He cited the possibility of giving a new operator more than 14 years to comply with the environmental regulation.

Another possible outcome would be an extension of Doe Run’s bankruptcy proceedings, which would keep both facilities operational in the short term. Representatives who attended the meeting also mentioned changing tariffs which make the sale of zinc ferrite cost-prohibitive.

Protesters withdrew from the streets of La Oroya after news came in from Lima last night, and police began to remove rocks which blocked over 12 miles of the highway. The key road was blocked for over two days, leaving hundreds of vehicles stranded and forcing passengers to walk.

Mineworkers called an indefinite protest after an auction of Doe Run Peru’s assets in Junin’s Yauli province received no bids from metal-producing companies. The management company running the auction said the environmental restrictions combined with low global prices for commodities make the smelter an unattractive investment.

After the announcement of the closure this month of the Cobriza copper mine, another Doe Run asset which funds the salaries of the La Oroya employees, the local union called an indefinite strike in which one man was killed and over 60 injured.