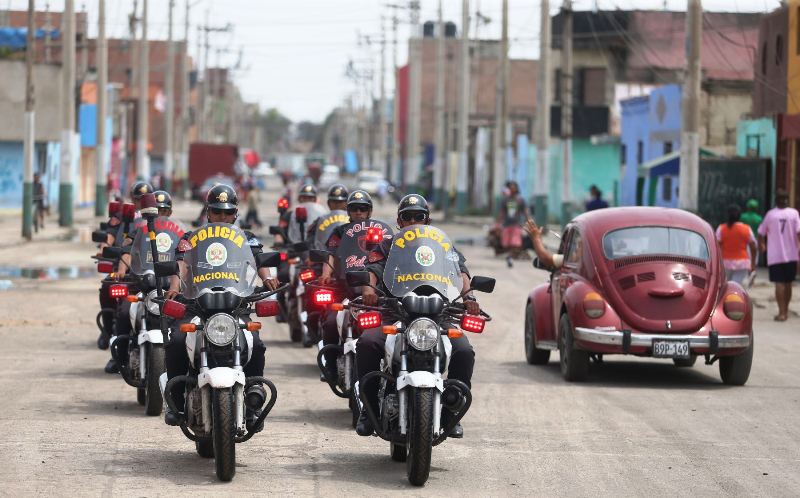 Peru’s national government agreed to extend a state of emergency to fight crime in Lima’s Callao district for 45 more days on Thursday.

The third extension of the legal measure which suspends citizens’ constitutional rights will bring the constitutional province of 1 million residents under martial law to 180 days. The first state of emergency was declared on Dec. 5 after the broad-daylight murder of a municipal security guard. The decree was extended on Jan. 16 and March 2 before another extension takes effect tomorrow.

Interior minister Jose Luis Perez had signaled his willingness to extend the martial law which has put 3,200 police officers on patrol in Callao’s streets if the regional government asked for it. Early Thursday morning a meeting led by Callao governor Felix Moreno and attended by Callao district mayors, prosecutors and judges decided to formally request an extension of the decree from the state.

“The first port has a million and a half inhabitants and about 3,200 police officers. According to a study we have done, some 7,000 agents are required,” Moreno, who faces 11 years for corruption, told Peru 21. “We are asking for the military to control the port.”

As rising crime is the top concern for voters in this election year, several politicians have called for the military to patrol Peru’s streets. Callao’s most dangerous neighborhoods border the maritime ports, through which drug gangs smuggle cocaine to the United States and Europe.

Peru’s legal state of emergency suspends individuals’ constitutional rights, allowing police to restrict citizens’ freedom of movement and freedom to assemble, as well as enforce curfews. The decree also suspends the protection from illegal search and seizure so police can enter homes and search vehicles without a warrant.

Perez recently highlighted the emergency’s effect in reducing the murder rate in Callao. The region saw 16 murders in January, nine in February and just four in March. He added that 27 murderers-for-hire had been arrested.

However two murders this week, including one port employee, reinforced the feeling of insecurity if the emergency were to end.

While the state of emergency had a positive effect on crime in the first weeks, the effects of martial law in Callao and Ancash have been limited as the government has continued to extend the decree in both areas.

A similar state of emergency declared in the Casma and Santa provinces of Ancash, which include the port city of Chimbote, has been extended since December.