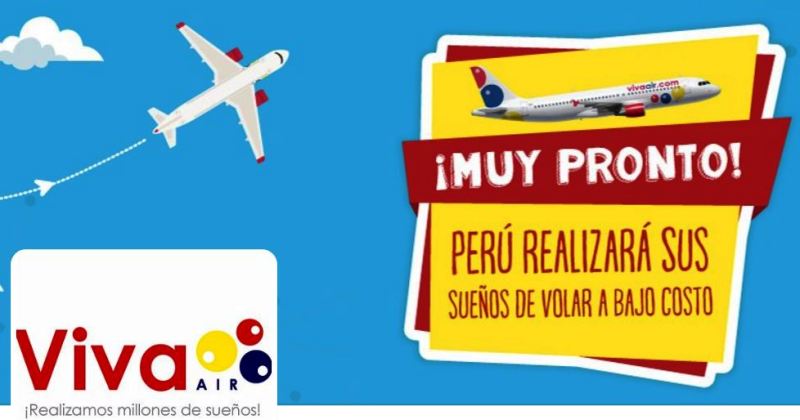 VivaColombia, a low-cost airline launched by the Ryan family’s Irelandia Aviation, has opened a subsidiary in Peru called Viva Air.

Launched in 2012, VivaColombia was Irelandia’s first foray into South America. The holding company which launched Ryanair and Allegiant airlines had introduced VivaAerobus in Mexico six years prior. Based in Medellin instead of Colombia’s capital of Bogota, the airline quickly grew to 16 cities including 12 in Colombia as well as Lima, Miami, Quito and Panama City.

VivaColombia began offering flights between Bogota and Lima in December 2014 three days per week, which increased to five days after one year and now six. Last week the company announced it would introduce domestic routes within Peru in the first quarter of 2017.

At a press conference today in Lima attended by trade and tourism minister Eduardo Ferreyros and PromPeru director Maria Soledad, company officials announced the launch of Viva Air Peru, a new airline with a distinct brand and website.

Peruvian subsidiary director Jose Castellanos said the company would aim to offer flights on many routes for $18 after taxes, representing a 50% discount on current market fares. The airline will initially serve seven cities in Lima, Cusco, Arequipa, Trujillo, Chiclayo, Piura, Iquitos and Tarapoto.

The press conference began with some confusion as a government presenter unsure of the new company’s name and how Viva Colombia fit in was prompted by a company official with “Viva Air Peru.” The website domain is VivaAir.com while the Facebook page is titled “Viva Air Peru.”

Ryanair pioneered a new low-cost airline model which went beyond the cost-cutting gusto of Southwest Airlines with a no-frills service which charges for everything from on-flight beverages to printing a boarding pass.

The model has disrupted the airline industries of Europe and North America as new competitors such as Spirit Airlines have emerged and traditional airlines have begun to charge for services which were previously free.

The news comes just after Declan Ryan, Irelandia Aviation chairman and son of Ryanair founder Tony Ryan, announced the company would sell its stake in its Mexican subsidiary, VivaAerobus.

“We’ve been in Mexico 10 years, we adore the country … But we think the new frontier is the whole of central and South America, and that’s what we’re concentrating on,” Ryan told the Financial Times. “To be frank, the Viva brand could be throughout South America … Viva won’t be as big as Ryanair because the access to disposable income is not the same, but I have no doubt the brand can go to 100 airports.”

Ryan added that he believes the region could support five national airlines and that his next market would likely be Argentina.