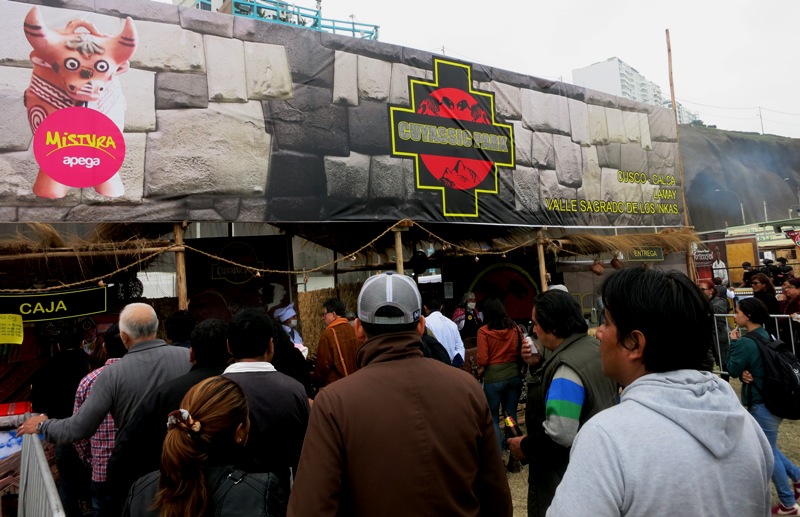 Mistura, Peru’s annual food festival held in Lima, has received sharp criticism for a perceived decline in quality and over-commercialization.

While Mistura has not released its official attendance numbers, Semana Economica reports that the number of visitors to the ninth edition probably fell short of its goal of 400,000. But more damning were several opinion columns which panned the ninth edition of Latin America’s largest food festival.

“The great culinary fair which crowned Peruvian cuisine finishes its ninth year amid a decline that seems unstoppable,” writes food critic Ignacio Medina in El Pais. “With barely any sponsors, a considerable decrease in stands, insufficient facilities and an ever-increasing distance from the consumer, the largest gastronomic fair in Latin America for the last four years languishes as a victim of its own ambition.”

Medina and others say the fair is less focused on food. The cocktail bars and artisanal beers combined with concerts every night have created an atmosphere of a party, they say.

The focus on off-premise purchasing at the Great Market of food vendors from around the country diminishes the role of cooking. Others point to long lines and a lack of innovation or reinvention.

“As good as barbecued pork on a stick is, it has to give way to new proposals,” one former Mistura sponsor told Semana Economica. BBVA Continental, Movistar and Backus y Johnston dropped their sponsorships this year, and advertising revenue fell an estimated $1 million, or 20%.

The advertising shortfall was made public when Apega, the gastronomical society which produces the event, criticized mobile-services provider Bitel for placing brand advertisements in the parking lot when the official sponsor was Claro. For its part, Apega points to the need to earn back the $5 million it costs to produce the fair.

Because Apega does not have a permanent site to host the festival, it spends half of that budget to set up and break down the food stands, tents and auditoriums every year. The lack of adequate facilities is one of Mistura’s top challenges.

Since 2013, Mistura has been held on a beach in Magdalena del Mar next to the Costa Verde highway. The area is difficult to access by public transportation. Some of Peru’s best restaurants refuse to participate because of the lack of running water.

In a column for El Comercio, president Bernardo Roca Rey called on the government to give Mistura more support in designating a permanent site for the festival and avoid the setup costs. He recently told El Pais that Apega has acquired its own space for next year’s festival.

“Next year we will have a constructed site. We already have a space.”

Despite the criticism from local and international media, Roca Rey said that over 400,000 attended and that 2016 was the year Mistura would “internationalize.”

“Mistura is here to stay on the palate and in the heart of the Peruvian and has the admiration of the world, but we cannot let our guard down,” Roca Rey writes in El Comercio. “We need more culinary schools that are committed to research, innovation, formalization and sanitation. We need more entrepreneurs and chefs to give the best of themselves.”