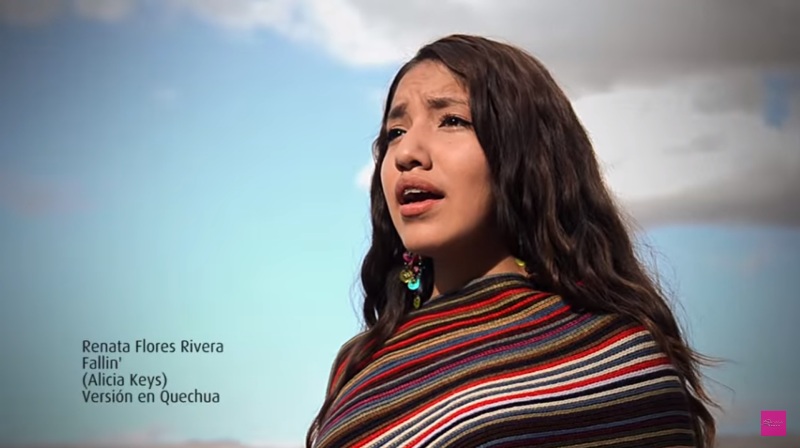 Flores’ cover of “The Way You Make Me Feel” by Michael Jackson, published three months ago, has over 1.2 million views on YouTube. Her adaptation of “The House of the Rising Sun” has been watched almost 200,000 times in five months.

Today Flores released what will likely be another success in her Quechua version of Alicia Keys’ “Fallin’,” which won three Grammys in 2002 including Song of the Year. The cover substitutes a harp and guitar for the piano and the video features Flores singing in the mountains near the Laguna de Pomacocha in Ayacucho state.

“The purpose of what my parents and I do is to preserve the culture and language, which is our identity,” Flores said. “Music is our way of doing that.”

Flores’ mother Patricia Rivera is the president of the Surca association’s project, “Young people also speak Quechua,” which was founded in the provincial capital of Huamanga 13 years ago “to revalue the ancestral language among children and youth.”

“Thanks for the talent of Renata Flores, who is also a beneficiary of the project and receives Quechua classes along with other youth in the community,” reads Flores’ website.

Flores’ songs have won her publicity in Public Radio International and the BBC, in addition to the Peruvian media.

According to Peru’s statistical agency INEI, 65% of residents in Ayacucho speak Quechua. The Cangallo province has the highest percentage with 90%, while the state’s only province where less than half of the population speak the language of the Incas is Lucanas, with 43%.

Fellow Peruvian singer Sylvia Falcon’s adaptation of Peru’s national anthem in Quechua has been viewed over 360,000 times since July.