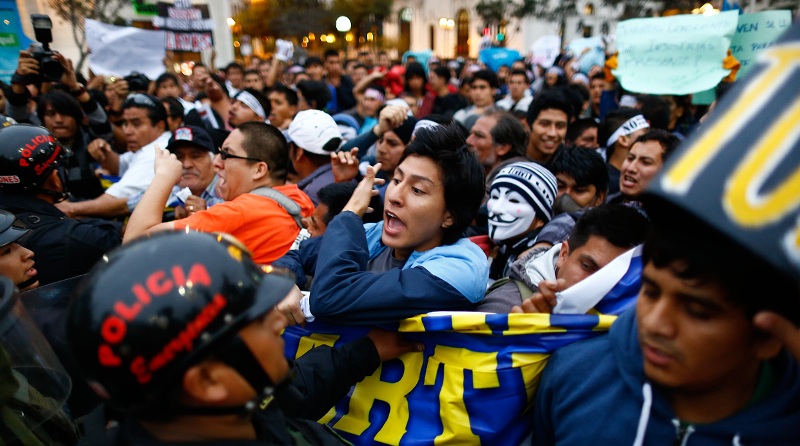 Peru’s governing party has introduced to congress a new version of a controversial labor law which was defeated after violent protests in downtown Lima last December.

Law 30288, the Law that Promotes Access for Young People to the Labor Market and Social Protection or more commonly known as the “pulpin” law, was passed by Congress last December in an effort to reduce unemployment in Peruvian adults aged 18 to 24. Among other measures to incentivize employers, the law cut unemployment benefits and reduced vacation time. After passing with a clear majority in December, the pulpin law was repealed in January by an even greater majority after large and sometimes violent protests in downtown Lima.

On Monday, a new version of the pulpin law was introduced by a congressman from President Ollanta Humala’s ruling coalition. The new law, which will be optional for employers and employees, offers tax credits to employers for training young employees. New hires under the law would receive healthcare and unemployment benefits from the state during their first year of work. Labor contracts would last a minimum of one year with a maximum probation period of 15 days.

“What they are doing is charging the state with labor costs – unemployment, healthcare and training,” said Gisella Figueroa, a legal consultant with Peru’s labor union association, who has called the new measure “Pulpin Law Lite.”

In addition to unemployment in young adults, the law also aims to reduce informal employment in Peru. Data from the education ministry shows that only 25% of Peruvians between 18 and 24 years old work in formal jobs with legally-guaranteed benefits, while 33% work informally and 9% are unemployed.

Proponents of the law highlight Peru rigid labor laws, which earned the country a ranking of 130 of 144 countries on the World Economic Forum’s labor flexibility scale.