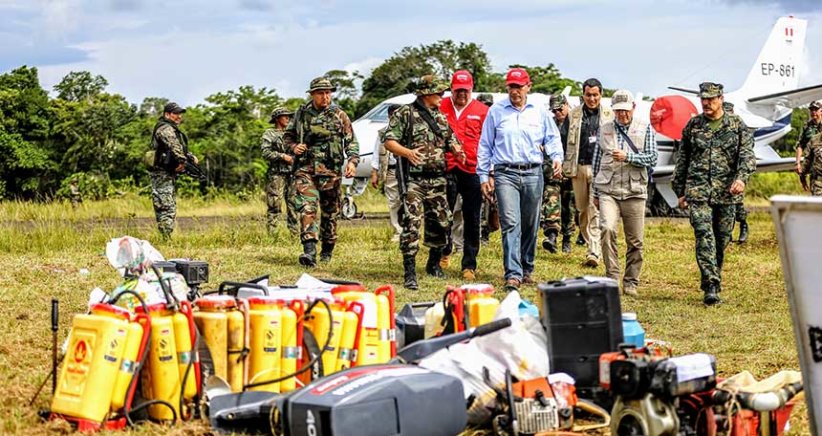 On the eve of a 60-day emergency on the Peruvian border with Colombia, authorities announced Monday a large offensive against reported drug traffickers and FARC dissidents that led to 51 arrests. The operation took place in Colombia’s Amazonian province of Putumayo and involved 350 Peruvian officers and armed forces in a joint effort with Colombian authorities.

“More than 50 people have been arrested, the vast majority Colombian nationals who were involved in illegal drug trafficking,” said President Martin Vizcarra in a speech from the region.

“Drug trafficking is a cancer that mixes with corruption and together they endanger our country’s development,” Vizcarra added. “We are not going to allow it and we are working on all fronts to combat drug trafficking and corruption, whatever the cost and whoever needs to fall.”

The operation called “Armageddon” was carried out just one day after Vizcarra announced a two-month state of emergency in a region where FARC rebels recently carried out attacks against Ecuadorian forces. This will entail the increased presence of Peruvian military on the border to ensure the security of locals and combat drug trafficking.

A few months ago, the region was hit hard by the news that Colombian rebel group dissidents kidnapped and murdered Ecuadorian journalists along the same border area.

There are expected to be more than 1,000 FARC rebels still active who refused to lay down their weapons and agree to the cease-fire treaty that granted amnesty and Congressional seats to the leftist group.

Vizcarra and Peruvian authorities said, in addition to the arrests, that they were able to locate drug production facilities. Four cocaine labs located by Laguna de Pacoya were destroyed, according to a report from Peru’s Office of the Presidency.

“You messed up in the World Cup”: Cueva’s uncomfortable fan encounter