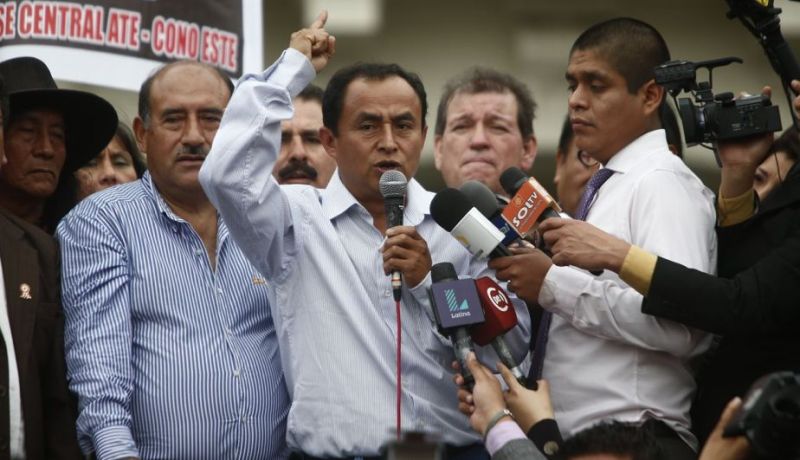 Santos had served 25 months of preventive jailing while awaiting trial on charges of bribery, conspiracy and racketeering, for which he faces up to 24 years in prison. He was first jailed in June 2014, during his last year of a four-year term as governor of Cajamarca.

Santos held a rally in downtown Lima after being released. The popular firebrand was reelected governor in October 2014, but was unable to assume office from jail. It is unlikely that he will assume the governorship while awaiting trial.

“Preventive jailing in Peru has become a tool of political revenge,” Santos told reporters upon being released. “I am only recovering what never should have been taken away from me – the right to defend myself in freedom.”

Santos added that 60% of Peru’s 77,000 inmates are detained under preventive jailing statutes. He called for a national debate on the issue.

Under Peruvian law, preventive jailing allows defendants to be jailed before being convicted when prosecutors submit compelling evidence. Santos’ personal bank account statements showed deposits of over $150,000 from a company which was awarded 11 state contracts during his administration.

Whether Santos would be released or not was not clear as recently as Monday. Prosecutors’ request for a second seven-month extension of preventive jailing was denied on July 12. The next day a different judge granted the extension on appeal. On Wednesday a top appeals court overturned the extension given one of the charges was dropped, and ordered Santos released immediately.

Santos’s parole is contingent on his paying a $30,000 fine in the next 15 working days. He told reporters that he could not pay the fine. He is also forbidden to change residence or contact witnesses involved in his case.

“Santos will be convicted,” prosecutor Joel Segura told La Republica. “There is a plethora of evidence.”

Santos ran for president in 2016 elections and surprised observers by coming in sixth place by winning 4% of the popular vote. His Direct Democracy political party would have won five seats in Congress, but it failed to garner the minimum 5% of the national vote required to be seated in the legislature.