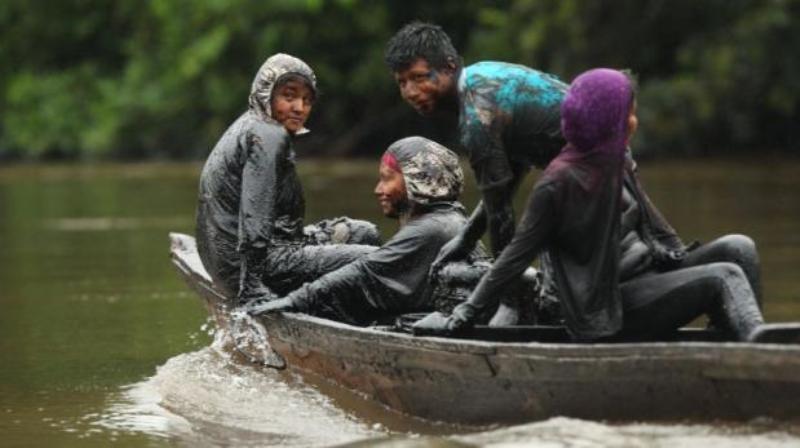 Two breaches in the Northern Peruvian Pipeline have contaminated the Marañon river in Peru’s Amazonas and Loreto states.

The first breach in the pipeline occurred on Jan. 25 in the Bagua province of Amazonas, eight miles from a creek which feeds the Morona river, a major tributary of the Amazon river. The second spill from the same pipeline began on Feb. 3 in the Datem del Marañon province in the neighboring Loreto state.

State oil firm Petroperu, the operator of the pipeline, said in a statement that the first breach was caused by a landslide. The company set up walls in the area to contain the oil, but heavy rains strengthened by the El Niño climate phenomenon overflowed the barriers. The cause of the second spill is currently under investigation.

Petroperu statements have not confirmed the amount of oil released from the pipeline, but some have estimated 2,000 barrels. The affected area is home to over 8,000 people. The oil has contaminated an unspecified number of cacao crops.

An indigenous organization said that the Marañon river has been contaminated. However Petroperu president German Velasquez said in a statement that, thanks to a quick response from the company, the river is not contaminated. Peru’s environmental enforcement agency OEFA has taken water samples, for which results will be ready in one month.

“Petroperu can’t attribute the pipeline fracture to nature,” environment and energy specialist Freddy Rojas told El Comercio. “This pipeline is from the 60s, so they have to foresee these accidents. Mismanagement in this area is clear.”

“We must protect the Amazon rainforest, but also the crops, and many have been affected,” environment minister Manuel Pulgar told Andina. “The state company will have to be punished with the highest fine.”

Pulgar told Gestion that Petroperu could be fined as much as $17 million.

The state firm was also criticized for allegedly hiring minors to help clean up. The company offered $2 per bucket of crude to the residents affected by both spills. Despite pictures depicting minors collecting oil, Velasquez’s statement insisted that the company only hired adults. Local residents told El Comercio that any children were put to work by their parents, and not the company.

The Amazonas province of Bagua was the setting of the 2009 “El Baguazo” protests against oil exploration which pitted natives against police officers in bloody confrontations which left dozens dead from both sides. The Datem del Marañon province is currently under a health emergency after several children died from being bitten by rabid bats.