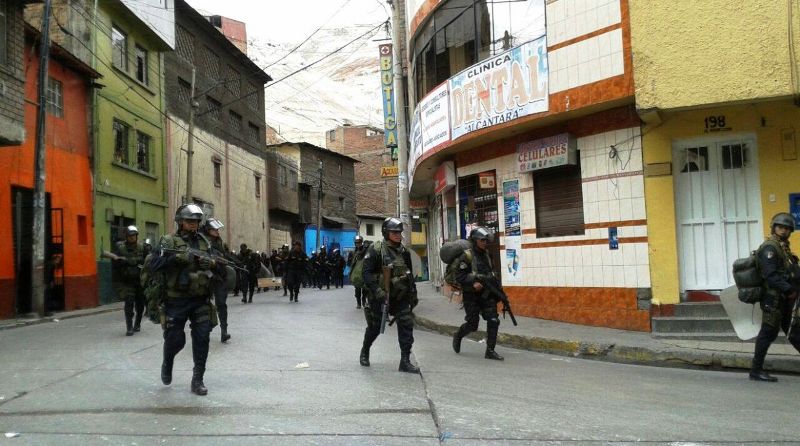 A man was killed today in clashes between police and mineworkers demanding relaxed environmental standards at the La Oroya smelter in Junin state.

At midnight this morning workers from the Cobriza copper mine blocked the Carretera Central highway in the town of La Oroya in Yauli province. The demonstration blocked hundreds of trucks and buses, forcing passengers to walk to their destinations.

At 10 a.m. police tried to dislodge the protesters with tear gas which led to clashes that sent over 60 people to the small La Oroya hospital. One man, who had gotten off a passenger bus to walk, was killed by a bullet wound in the chest.

On Saturday mineworkers called an indefinite strike in the town of La Oroya to demand the government relax environmental standards for the smelter which refined lead, zinc, copper and silver before being closed. The local union says that if the government fails to act, over 2,500 jobs will be lost.

In addition to flexibility in the environmental standards, workers are demanding talks with the mining and energy and environment ministries, the Junin regional government and the La Oroya municipal government.

Doe Run Peru, which entered bankruptcy proceedings in 2009, has been allowed to operate its Cobriza copper mine since a liquidation process started in 2012. However when the auction to sell the La Oroya smelter operations received no bids last week, the company announced the closure of the Cobriza mine, prompting the indefinite strike.

Doe Run Peru closed the La Oroya smelter when its suppliers stopped shipping metals in 2009, when commodity prices fell as much as 50% during the global financial crisis. Doe Run Peru, which was already distressed before the fall in base metal prices, was fined over $163 million for not complying with environmental requirements outlined in its 1997 license.

“Meeting environmental standards would require a level of investment which would make the reopening of the La Oroya metallurgical complex uneconomical,” read a statement from Profit Consultoria, the company managing the auction.

La Oroya is consistently deemed one of the world’s most polluted areas in the world. A 2005 study showed that over 97% of children under 12 had elevated levels of lead in their blood. Almost three quarters of those had twice as much blood-lead as is deemed high in the United States, and a quarter had over four times as much.

The Cobriza copper mine produced 21,000 tons last year and is one of the top copper producers in the country.