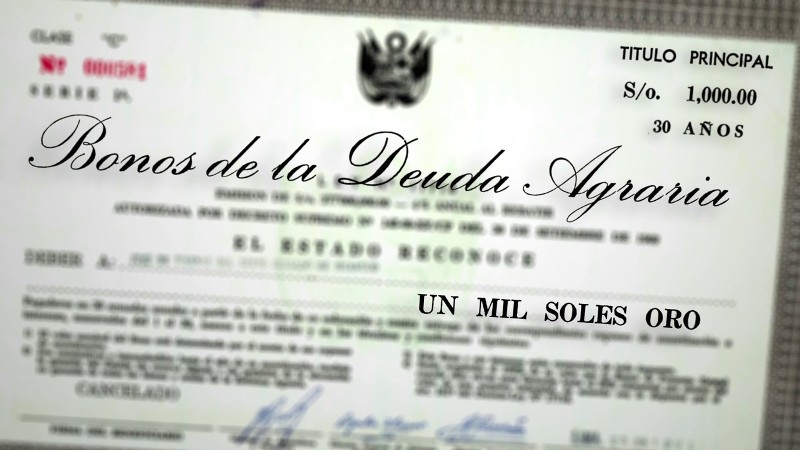 The U.S.-based hedge fund, Gramercy Funds Management, is threatening to sue Peru for payment with interest of 40-year-old bonds from the agrarian reform.

The military dictatorship of President Juan Velasco expropriated 23 million acres of farmland in the country’s agrarian reform of the 1970s. Landholders received bonds with maturity dates of 20 to 30 years, on which the government defaulted in Peru’s 1980s economic crisis.

Gramercy began buying those bonds in 2006, just before the United States-Peru Free Trade Agreement took effect in 2009. Now Gramercy is looking to compel Peru’s government to pay $5.1 billion for the long-defaulted bonds.

“While recently seeking a consensual resolution, we were told point blank by a senior Peruvian official, ‘Make us care’,” said Gramercy partner James Taylor. “Given Peru’s indisputable ability to pay a $5 billion debt, this clearly is a voluntary and selective default.”

In 2013 Peru’s constitutional court ordered the government to outline a plan to repay the debt. However the finance ministry’s $400 million valuation of the bonds is less than 10% of what the bondholders, many of whom are the Peruvian families whose properties were seized, say the land was worth.

At the heart of the dispute is how to value the 40-year-old bonds. Since they were issued, Peru has changed currency twice and suffered hyperinflation which lasted years. An independent study criticized the government’s valuations of the nuevo sol to the dollar and its interest rates.

Having emerged from an economic crisis which spanned two decades and a bloody armed conflict, Peru’s government is loath to pay the debts of the military dictatorship to a company critics have called a “vulture fund” for its practice of buying up emerging markets’ defaulted debt. Experts say Gramercy probably paid less than 20% of the bonds’ face value.

Vulture funds have drawn ire across Latin America as Paul Singer’s Elliott Management is engaged in a legal battle with Argentina for bonds it defaulted on in 2001. However Argentina’s bonds were sold in New York, which allows Elliott to sue in U.S. courts. Peru’s agrarian reform bonds were issued in Peru.

However Gramercy’s position in Argentina’s is opposed to Elliott’s. While Elliott has pursued a strategy of confrontation with President Cristina Fernandez’s government, Gramercy has cooperated and advised Argentina on how to exit the crisis and reestablish ties with international investors.

“These are bonds issued under Peruvian laws and the highest legal entity has ruled we have to pay with a certain methodology, and we are doing that unquestioningly,” a source at Peru’s finance ministry told the Financial Times. “Evidently there are some bondholders that would like to be paid differently, but Peru is being utterly respectful of its legislation.”

Gramercy may have given up on negotiating with President Ollanta Humala’s government. The timing of the company’s latest statements coincide with annual meetings between the World Bank and IMF held in Lima last week as well as Peru’s signing of the Trans-Pacific Partnership, which includes an Investor-State Dispute Settlement tribunal viewed as friendly to business interests over governments.

Peru’s government insisted on Sunday that the bonds would be valued according to Peruvian law. But Gramercy is expected to pursue legal routes in the United States or the future TPP protocols if it cannot reach a satisfactory settlement.

“If the Humala administration continues to refuse to engage, we will be forced to pursue our legal remedies, which include the possibility of commencing an international claim against Peru under the U.S.-Peru Free Trade Agreement,” said Taylor.

Not all of Peruvian analysts oppose a full repayment to Gramercy and the Peruvian bondholders who have formed the Peruvian-American Bondholders for Justice (PABJ) in the U.S. and the Alliance for Fair Payment of the Agrarian Bonds (APJ) in Peru.

Former finance minister Ismael Benavides argues that while paying as much as $5.1 billion would increase the government’s debt as a percentage of GDP by 2.3%, the reduced costs of borrowing once credit markets factor in the government’s repayment of the long-forgotten bonds could save as much as $18 billion in 30 years.

“The world — including investors and obviously the bondholders — will be watching how the government and its judicial system resolves this seemingly minor but increasingly troubling longstanding issue.”

Peru’s test on respect for rule of law (Miami Herald)

Why is Peru Not Repaying Its Land Bonds? (PABJ)