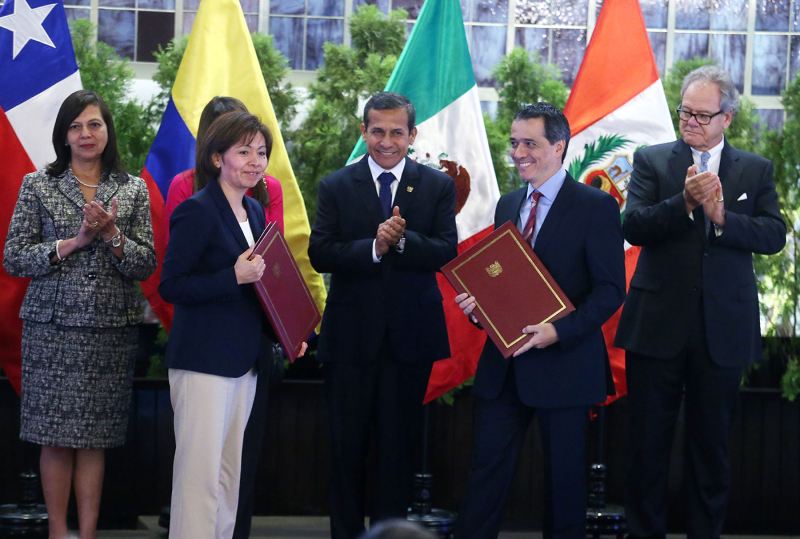 The Pacific Alliance free trade agreement eliminates member countries’ tariffs on 92% of imports and exports with the aim of developing regional value chains.

The free trade agreement for the regional bloc which includes Peru, Chile, Colombia and Mexico took effect on May 1. The remaining 8% of tariffs will enjoy a grace period to be phased out over the next three to 17 years.

“The alliance complements the bilateral agreements that we already had with each of the countries,” international trade minister Magali Silva told El Comercio. “In the case of Mexico, we had a 82% liberalized basket, and we have immediately gone up to 96.4% tariff-free.”

A BBVA Research report highlighted cosmetics, manufactured food products, beverages, fabrics, paper and cardboard as Peru’s products with the most growth potential in the other Pacific Alliance markets.

However Pacific Alliance members already enjoyed tariff-free commerce for most products. Officials tout value-added products made in a regional product chain as the greatest opportunity from the new trade rules. The agreement establishes new rules of origin, which will not change a product’s country of manufacture if it contains elements made in another country.

For example, cars made in Mexico which use Peruvian batteries enjoy tariff-free access to the United States, which has free-trade agreements with both countries. Under the new norm, inputs can be used from any or even all of the Pacific Alliance countries to make a final product which can pass tax-free through any member country to be exported to global markets outside the Pacific Alliance.

“This is an event in Latin American trade similar to what happened with the ‘big bang’ of the London stock exchange 30 years ago after the massive deregulation that completely transformed the British financial market with worldwide repercussions,” writes Peruvian Institute of Economics president Roberto Abusada. “92% of goods produced in the four countries of the Pacific Alliance … can be traded with zero tariffs. These goods can move freely within this vast territory as if it were a single nation.”

The governments of the Pacific Alliance hope the agreement will lead to the development of regionally interdependent industries for automobiles, petrochemicals, manufacturing, mining and more. They are also betting that liberalized rules in a free-trade region will increase foreign direct investment from countries in North America, Europe and Asia.

Mario Illescas, director of Chile’s exporters association, told Correo that small and medium-sized manufacturers of cosmetics, metal mechanics and plastics in Peru will benefit from the new rules of origin.

“Just a few months from end of the current government and revolving presidency of the Pacific Alliance, I am convinced that in the next five years this important process of integration will remain a centerpiece of our foreign policy,” foreign minister Ana Maria Sanchez wrote in a column published in El Comercio. “This will allow us to face, along with our partners in the alliance, the great challenges of the 21st century.”

The Pacific Alliance is the world’s eighth-largest economy with a GDP of $5.4 trillion, or 39% of Latin America’s total. Peru, Chile, Colombia and Mexico have a combined population of 221 million. Peru’s exports to Pacific Alliance members reached $2.5 billion in 2015, or 4% of total exports.