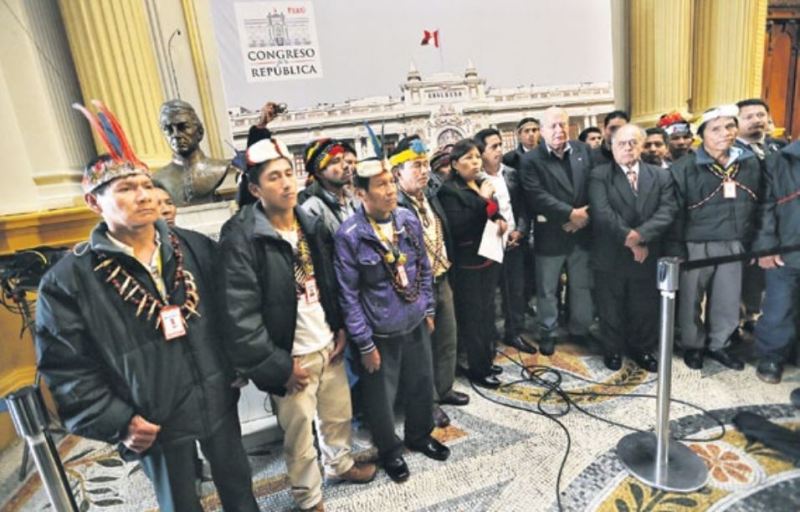 The Loreto state governor and local indigenous organizations have called an indefinite strike to protest the central government’s licensing of block 192 to a private company.

On Monday morning La Republica published a story titled “Omega, the new licensee of block 192,” which announced the pending deal for a Colombian oil firm to operate the largest oil block in the country for two years.

“This was confirmed by sources in both the government and the oil sector who pointed out that the announcement and relevant paperwork will be official in the course of the week,” the article stated.

In light of the news, Loreto governor Fernando Melendez and indigenous leaders from Loreto, who were in Lima to negotiate the oil license’s operation under Peru’s Prior Consultation Law, announced an indefinite strike to protest the nation’s largest oil block to a private company.

“We hope that by Wednesday the [government] reconsiders its decision on the fate of block 192. All the provinces [of Loreto] know that, if not, we’re launching an indefinite strike,” said governor Melendez.

Mining and energy minister Rosa Ortiz quickly dispelled the news that Omega had received the license. She added that Omega was one of three companies in negotiations with Perupetro, the national oil regulator charged with selling the license.

The state newspaper El Peruano followed Ortiz’s comments with an article clarifying that no deal had been reached. “No information should be given until it’s totally confirmed because it generates opinions for or against which are unnecessary,” the paper quoted Ortiz as saying.

Whether Omega gets the license or not, the Loreto community seems poised to protest the operation of block 192 by any private company currently in talks with the government. The indigenous communities and regional government officials had increasingly called for the block to be operated by state oil firm Petroperu.

“I just want to remind all Peruvians that [block 192] has 145 million barrels of oil. At current prices we have more than $6.8 billion. We can’t give away our resources like that,” Melendez said.

However officials from the mining and energy as well as the finance ministry have dismissed the possibility of licensing Petroperu, which is financially overextended with a $3 billion upgrade to the Talara refinery and has not drilled oil in over 20 years.

The press has since reported that the Canadian firm Pacific Rubiales, which was previously believed to be uninterested, is one of the other two companies in negotiations with the government.

The third party in talks with the Perupetro over the license is still unknown. Anglo-French company Perenco left negotiations last week.

Two weeks ago an auction held by Perupetro received no bids to purchase the facilities at block 192 for $346 million. The oil regulator has since entered direct negotiations with energy companies to license Peru’s largest oil concession.

The current license operated by Argentine firm Pluspetrol, with whom the local communities have had various conflicts in recent years, expires on Aug. 29. Without a new operator, the wells at block 192 will be shut off.