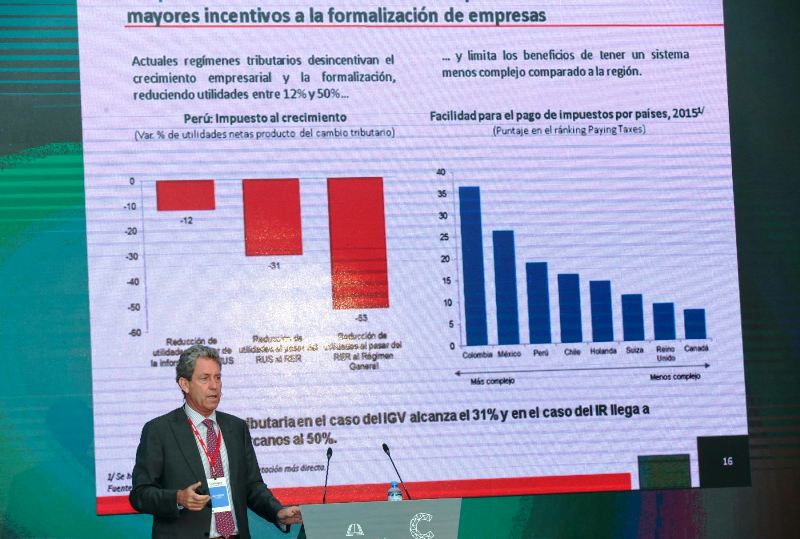 Peru’s government will include a controversial cut to the national sales tax in its request for decree powers from the opposition-controlled Congress.

Peru’s newspapers on Monday reported that President Pedro Pablo Kuczynski said that his plan to reduce the national sales tax from 18% to 17% would not be enacted by decree under powers his government will request next week. In an apparent reversal, Cabinet chief Fernando Zavala told reporters today that the tax cut would be included in the government’s economic package.

“We have analyzed the issue and will include the sales tax [cut] in the request for decree powers,” Zavala said. “We will ask for permission for the decrease which will have an impact on the economy.”

The proposed cut comes after the president revealed that the previous government of Ollanta Humala grew the fiscal deficit more than previously disclosed and government revenues stagnated. The issue will prove contentious among the Popular Force party which holds 73 of Congress’s 130 seats, as well as other parties which oppose the cut.

The government is willing to challenge the opposition majority because it pledged to cut informality in half by the end of its five-year term in 2021. Since finance minister Alfredo Thorne’s formalization plan does not include modifying Peru’s rigid labor regulation, cutting taxes are seen as essential to attracting informal businesses to register with the state.

The proposal has set the stage for what may be Kuczynski’s first battle with Congress.

“We have said it is a mistake,” Popular Force spokesman Luis Galarreta told El Comercio. “We thought that the government understood that and now they’re trying to pass it.”

“If the problem is that the state is not collecting [enough taxes], saying it will reduce the sales tax could reduce the precarious state revenue even more,” Broad Front spokeswoman Marisa Glave said.

In response to the criticism, the government proposed raising Peru’s corporate tax rate to make up for the lost revenue in sales tax.

“This way we will be able to finance part of the reduction of the sales tax,” finance minister Alfredo Thorne told Gestion. “We will benefit the middle-class segments and we will make the economy grow primarily based on increased consumption and investment from small and medium-sized businesses.”

Even with lower taxes, some analysts believe any formalization plan which does not address labor regulation would fall flat.

“International empirical evidence establishing a link between tax relief and formalization is unclear and, in the Peruvian case, the determinants of informality seem to transcend the tax rate,” says an El Comercio editorial. “From a political standpoint, [labor reform] does not attract attention. Reducing taxes will always be more popular than reducing work benefits.”

However David Bohl, a University of Denver researcher who helped develop a labor-market forecast for Peru’s state planning agency, told Peru Reports that formalization gains could be achieved without changing Peru’s labor regulation.

“Buried within our index there is some ‘business-friendly’ labor regulation, but there are many other ways of improving business regulation,” Bohl said. He cited lower taxes, improved government services and benefits such as unemployment insurance and pension plans. “When you combine them into an integrated, multi-pronged intervention is when you get the most bang for your buck.”

Zavala will present the government’s request Congress for decree powers next week. In addition to the economy, the government will ask for authorization to enact laws addressing crime, corruption, expanding service of running water and reorganizing the state oil firm, Petroperu.