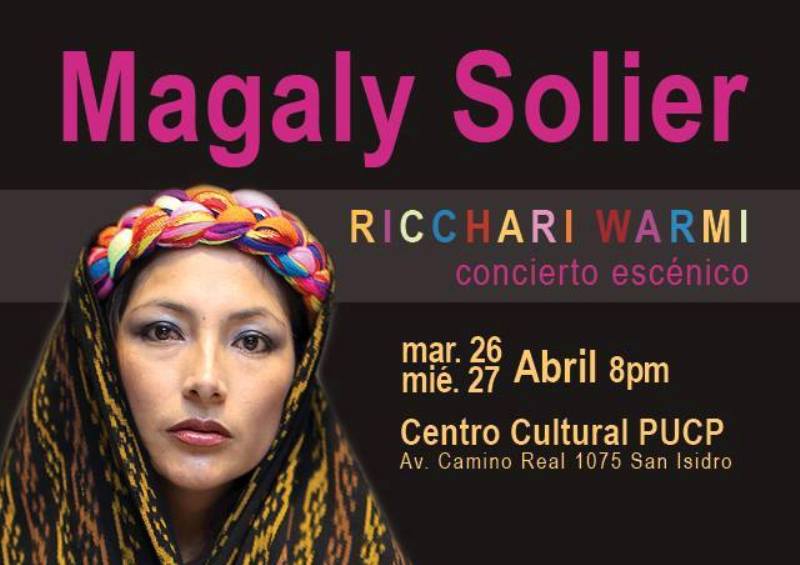 Award-winning actress Magaly Solier will star in a one-person live performance featuring singing and storytelling about love in Peru.

Solier will direct and star in “Ricchari warmi,” which is Quechua for “Wake up, woman.” The actress and singer will play the parts of eight different women to tell the story of an elderly Peruvian woman’s life. She will perform in Spanish, Quechua, Aymara, Ashaninka and Mochica.

“[The show] is a challenge and something exceedingly dangerous which makes me very nervous,” Solier told El Comercio. “This time I opted for a challenge to prove something to myself. I tried to get out of my comfort zone. I want to see how far I can go.”

The story was developed from the songs on her new album, “Coca Quintucha,” Solier’s second after the 2009 album, “Warmi.” Solier will be joined by Andean flutist Fredy Gomez, guitarist Ronald Contreras and percussionist Cali Flores.

The native of Ayacucho will perform “Ricchari warmi” at the cultural center theater of the Catholic Pontifical University of Peru (PUCP) in Lima on April 26 and 27.

Solier’s career starred in Claudia Llosa’s 2005 film, “Madeinusa” and the 2009 Academy Award-nominated film “Milk of Sorrow.” Solier won the Lima film festival’s award for Best Actress in 2015 for her role in “Magallanes.” Solier is an official ambassador for UNICEF as well as the state tourism board, Marca Peru.