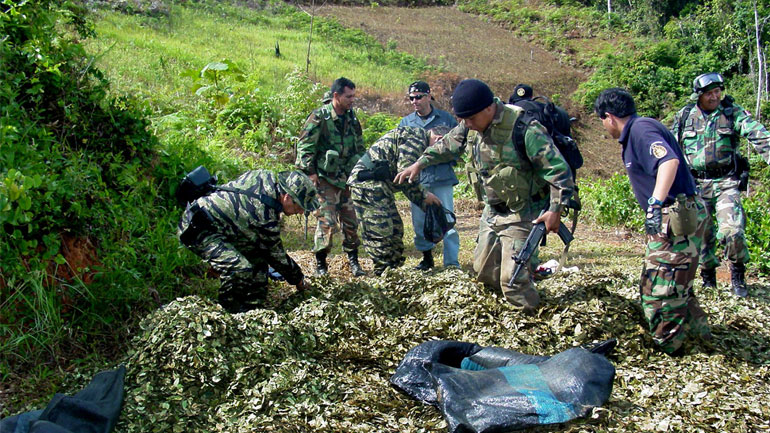 Following a drop in coca leaf production, Peru is no longer the world’s top producer of the crop used to produce cocaine, the United Nations said Wednesday.

According to the annual coca crop survey of the United Nations’ Office on Drugs and Crime (ONDC), the amount of land used for coca cultivation fell 14% from 49,800 hectares in 2013 to 42,900 last year.

Additionally, said the head of Peru’s drug agency DEVIDA, Alberto Otarola, the country was able to reduce its cocaine production to 270 metric tons from over 300 metric tons in previous years.

Thanks to Peru’s three-year drop in coca production, Colombia retook its position as the world’s primary coca producer after having left this disreputable honor to Peru for two years.

“Right now, we can say that Peru is not the largest cocaine producer in the world,” Otarola said.

The reduction marked “a significant achievement” for Peru, said UNODC’s representative in Peru, Flavio Mirella. According to Mirella, the amount of land under coca leaf cultivation in Peru is the lowest since 1999 when 38,700 hectares were used to grow the plant.

Part of the drop in coca cultivation was due to a government program that encourages impoverished farmers to grow cocoa and coffee instead of coca.

While the drop in coca production was significant nationally, it was minimal in the VRAEM region, a mountainous area where the Shining Path guerrillas operate, offering protection to local and international drug traffickers.

How the Shining Path works with Colombian drug traffickers

According to local authorities, 90% of coca crops grown in Peru are for cocaine production. The remaining 10% is used for traditional consumption.