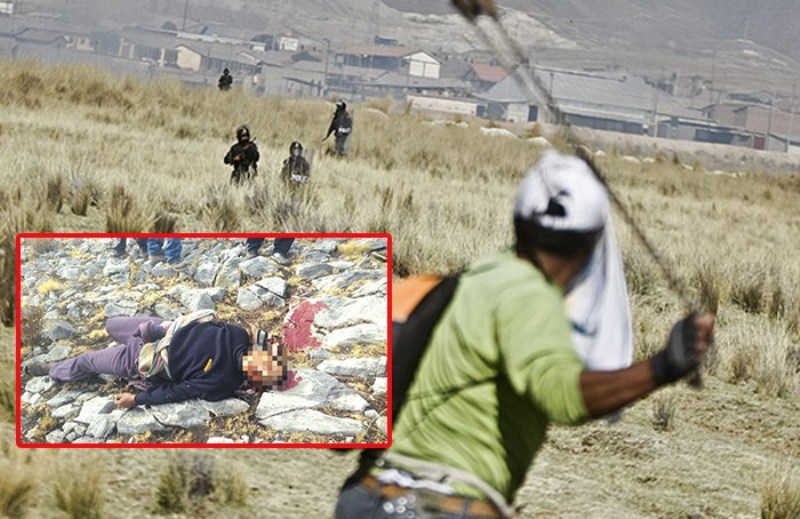 Police in Peru killed a protester on Friday while trying to clear a road near the Las Bambas copper mine in Peru’s Apurimac state.

Clashes broke out when police tried to clear an estimated 200 protesters who had blocked an access road in the Challhuahuacho district of the Cotabambas province, home to Peru’s largest copper mine which came online this year.

The victim died from a bullet wound to the head, presumably fired by Peruvian police. Peru’s interior ministry issued a statement saying that 20 policemen were injured in the clashes, and that one of them could lose an eye after being hit with a rock.

“The community has never disagreed with the project. They are not anti-mining,” community spokesman Rodny Cabrera told RPP. “The issue is that they cheated us, they lied to us. The mining company changed the environmental impact plan. The ore was going to go through a pipeline, not trucks that are polluting the fields. How will people live?”

The protesters are angry about the Chinese firm MMG’s scrapping of a planned pipeline which requires the company to transport copper concentrates out of the area by trucks. At least 300 trucks pass through the area around the mine every day, according to reports. Cabrera said the dust emitted has led to the deaths of livestock, and the noise is a nuisance in the rural community.

La Republica reports that community leaders have requested that MMG Limited pay for the use of local roads to compensate for environmental damage and inconvenience.

A community lawyer told Peru 21 that 34 local residents were injured, some with bullet wounds, and another 12 were arrested. The interior ministry has said it is investigating the incident.

Friday marked the first death of a protester related mining and energy projects for the government of President Pedro Pablo Kuczynski. Social conflicts over rights to land, water and prior consultation have unleashed dozens of deaths and hundreds of injured between protesters and police in the last five years in this country whose economy is fueled by mining.

Kuczynski vowed to ease social tensions by delivering benefits from mining and energy investments to local communities before projects begin.

Peru’s agriculture ministry on Saturday morning announced $2.6 million in new investments for 11 infrastructure and irrigation projects near in and around Challhuahuacho in the Cotabambas province.

Last year three protesters were killed in similar conflicts near the $10 billion Las Bambas mine, which produces a fifth of Peru’s copper and will make the country the world’s second producer.

Pollution suspected in deaths of 10,000 endangered frogs in Peru