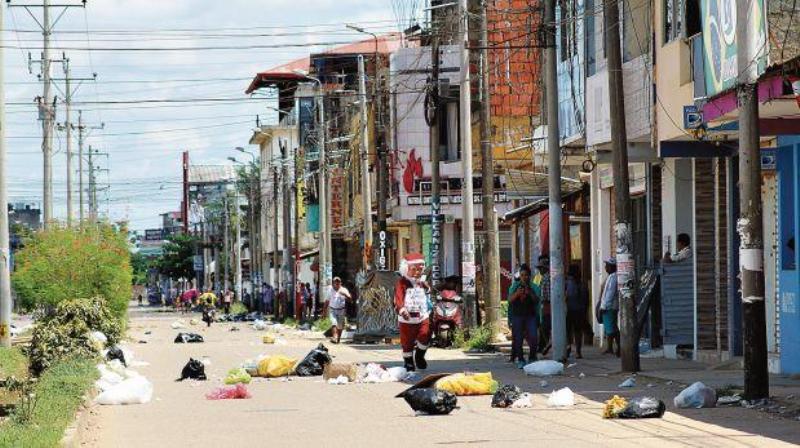 Cabinet chief Pedro Cateriano has agreed to visit the provincial capital of Puerto Maldonado this week to continue dialogue with Madre de Dios governor Luis Otsuka and local labor leaders who demand the repeal of two laws which look to stem illegal mining and logging.

The city is completely paralyzed and the streets are lined with trash. All the bridges are blocked with barricades or protesters. Cars and motorcycles do not circulate the streets out of fear that pickets of demonstrators will slash their tires. Protesters even slashed the tires of an ambulance.

Stores do not open during the day or evening out of fear their inventories will be looted. Prices on basic food items have spiked 30% when some stores open between the hours of 1 a.m. to 4 a.m.

“Why do we have to be afraid to go shopping?” one Puerto Maldonado resident said to El Comercio. “Why do we have to go out in the wee hours of the morning as if it were a crime to buy food? How long is the government not going to answer to the people of Madre de Dios?”

Crime in Puerto Maldonado is rising as police cannot respond to calls. A businessman’s home was shot at and the governor’s house was robbed. A regional tourism association cancelled all tourist packages due to the police’s inability to provide security and protect tourists.

Last Monday protesters launched an indefinite strike in Madre de Dios to demand the repeal of decrees 013-2015 and 1220. The first places limits on the amount of key mining inputs like gasoline are allowed to be purchased and the second increases criminal penalties for illegal loggers.

In Madre de Dios, a state of only 137,000 residents, illegal mining makes up 52% of GDP and accounts for 10% of Peru’s total gold production.