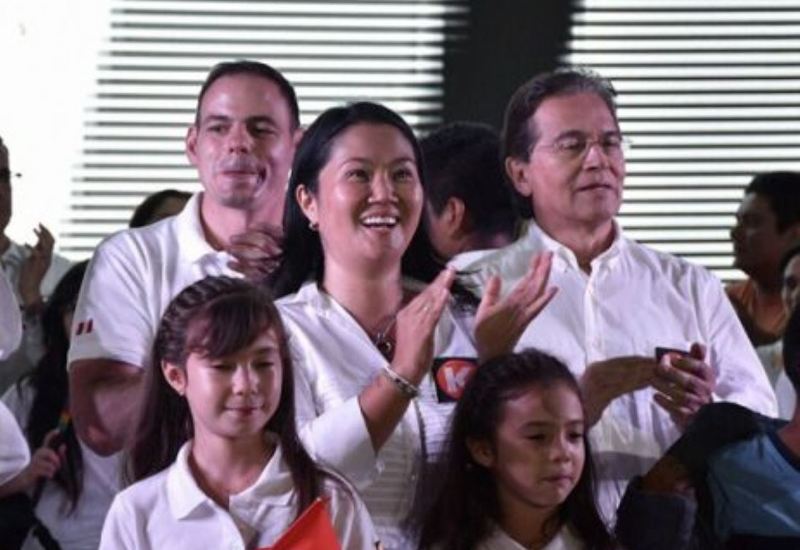 A special elections board in Junin state has barred Vladimiro Huaroc, the second vice presidential candidate for Keiko Fujimori, from running for Congress for vote buying.

Last week Canal N news cameras recorded the former governor of Junin, while inaugurating a new campaign office in Satipo province, giving out water and cans of tuna to the provincial mayor’s wife to help families affected by flooding in Pampa Hermosa.

A new amendment to Peru’s electoral law punishes giving gifts worth more than $6 during an election season with disqualification from the ballot. The resolution published by the JEE board in Junin said that, while it was not confirmed whether the supplies were ultimately delivered or not, simply promising gifts is grounds for exclusion from the election.

“We have brought you a small present in the name of Popular Strength and the candidates committed to the central region,” Huaroc says in the video.

The JEE board ruled that Huaroc will the removed from the ballot’s list of congressional candidates in Junin and the provincial capital of Huancayo, but it could not rule on his vice presidential candidacy because that inscription was done in Lima. The Junin board has recommended that the Lima board investigate the case as well. Huaroc must appeal his exclusion by today.

“Mr. Huaroc is going to appeal this decision. so we are going to wait,” Fujimori said from a campaign rally in Tacna.

Huaroc was one of the high-profile “draws” that Fujimori’s Popular Strength party attracted from other political movements. The former president of liberal party, Social Strength, was criticized by former Lima mayor Susana Villaran for teaming up with the daughter of former President Alberto Fujimori, a historic nemesis of Peru’s left.

Huaroc is the third Popular Strength congressional candidate to be disqualified from 2016 elections while nine more are in exclusion proceedings. Cusco’s Martha Yauri and Moquegua’s Dianira Meza were disqualified for violating internal party convention regulations and vote buying respectively. Mot of the nine candidates awaiting rulings face charges of vote buying as well as improper campaign advertising and lying or omission on their sworn resumes.

Fifteen congressional candidates outside of the Popular Strength party face similar exclusion proceedings, and Popular Action’s Miguel Tapia from Moquegua has already been disqualified. Most candidates are accused of vote buying or submitting false or insufficient resumes.

Aside from individual candidates facing disqualification for violating campaign laws, Peru’s electoral law has barred entire lists of candidates from some parties for not complying with internal democracy requirements.

The Everyone for Peru party, whose presidential candidate Julio Guzman himself was barred for not holding a legal convention, has withdrawn all its congressional candidates after many of its state tickets faced similar challenges for improper conventions.

The candidates for Veronika Mendoza’s Broad Front party have been barred from Arequipa, Puno and Tumbes.

Vladimiro Huaroc: “Yo no he dejado mis ideas” (El Comercio)

Peru: tens of thousands march against abortion in Lima