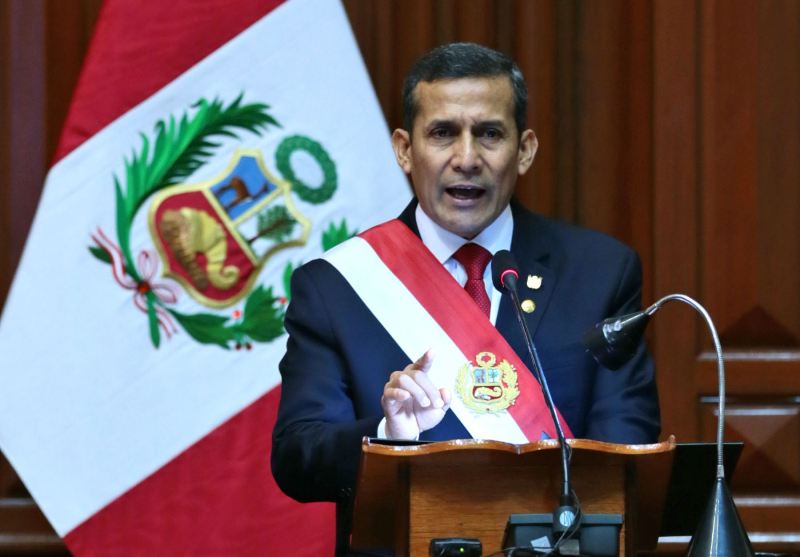 A summary of the key points in President Ollanta Humala’s final Message to the Nation speech delivered on Tuesday.

Humala delivered the last Independence Day address of his term from congress on Tuesday. His speech focused on his government’s accomplishments to date and the areas he still hopes to improve before leaving office.

Humala highlighted his government’s goal to spread economic growth to the furthest regions of Peru and give vulnerable populations the tools to rise out of poverty. He cited over 1.3 million Peruvians no longer live in poverty.

The President pointed out various social programs his government has enacted for children and mothers, under which 3.1 million children receive free lunch at more than 58,000 schools. He mentioned the expansion of pension benefits for poor elderly citizens from 26,000 to 500,000.

A government program promoting small businesses in impoverished districts has sold hundreds of thousands of products to schools, the military, the police force and the mining and energy ministry.

Humala’s government has documented 274,167 residents of 2,400 villages in the Amazon into the national registry so they can take advantage of social programs. Meanwhile, the government launched a program in which boats equipped to deliver state services such as banking, identification registration and social programs travel the rivers of the Amazon jungle as well as Lake Titicaca.

Humala said that while these improvements are difficult to see from Lima, “Today, Peru is a regional leader of social programs in Latin America.”

“The biggest challenge we have as a country is to offer a quality education for all Peruvians,” Humala said. “My government has increased the education budget by more than 70%, to $6.9 billion or 3.6% of GDP. An unprecedented level in our republican history.”

Humala touted a “meritocratic” selection process to hire 15,000 school principals. During the last four years, teachers’ salaries have increased 40% and pre-schools have opened in 3,500 districts.

Humala highlighted a record $3.6 billion in investment during the last three years to build over 3,000 schools. He added that number could be surpassed in the next five years.

Humala also mentioned programs which have awarded over 72,000 scholarships to Peruvian students, over half of which will attend the top 18 schools in the country, and 1,000 of whom will obtain masters degrees and doctorates at universities throughout the world.

Humala’s government increased healthcare spending by 75% since 2011 to $4.3 billion, including initiatives for babies born into poverty and the Plan Esperanza, which guarantees health coverage to cancer patients and was recognized by the United Nations.

Humala also announced that Peru’s health institute will begin studies to reproduce 10 key generic drugs to be sold at cost.

$2.3 billion was spent to build over 1,700 water treatment plants serving 7.5 million Peruvians. In the last four years, 2 of 3 Peruvians now have potable water. By the end of his term, Humala hopes to bring potable water to 95% of urban and 75% of rural households.

Humala said his government invested a total of $9.4 billion on infrastructure to date, and awarded 28 concessions for a record $20.5 billion.

One key initiative has been paving rural highways. During his administration, only 31% of Ayacucho roads were paved. Now 100% are paved and, nationwide, there are 3.5 times more paved roads from five years ago. Humala’s government continues to pave roads in the Andean highlands regions.

Humala cited the maintenance of over 14,600 miles of highways and the construction of over 1,000 bridges. He also mentioned a plan to subsidize flights between jungle regions in airports from Iquitos to San Martin, Ucayali and Madre de Dios.

In Lima, Humala mentioned the start of construction on the Lima Metro’s Line 2 as well as cable cars to be built in El Agustino and other northern districts of Lima. Another government priority are modern industrial parks for businesses.

His government spent $313 million to bring wireless broadband networks to 92% of the country’s provincial capitals.

Humala’s government spent $2 billion which helped build 152,194 houses through public housing subsidies and programs. Through the fourth year of Humala’s term, his government has doubled the number of homes built during the previous government

With recently enacted rent-to-own and leasing decrees, Humala’s goal for 2016 is to reach 250,000 subsidized homes.

Humala’s government delivered 1,000 fabricated homes to vulnerable populations in the Andean highlands to withstand cold winters. In 2016 he plans to deliver 13,000 more.

Over 280,000 legal home titles have been issued through COFOPRI, Peru’s state agency to encourage formal ownership of housing. The new titles house over 1.4 million Peruvians, and Humala’s goal is to formalize 400,000 informal homes by the end of his term.

“To build an inclusive, modern, integrated and prosperous nation approaching its bicentennial, we cannot stop the extraction and distribution of energy that moves our transportation and powers our industry,” Humala said. “The energy of the new Peru is, without a doubt, our natural gas and we have dedicated great effort to its mass production in the short- and medium-term.”

“In June 2014 my government began construction of the Southern Gas Pipeline, a giant project that will transfer gas from Cusco to the southern coast through Arequipa, Moquegua, Tacna and Puno, among other cities.”

“Cheap, clean and safe energy in Peruvian homes is not a project. It is a reality.”

Humala highlighted a tenfold increase in the number of gas connections in Lima, Callo and Ica who pay between $3 and $4 per month. His government aims to connect 500,000 households by increasing production of natural gas.

Humala mentioned the restart of the long postponed modernization of the Talara oil refinery, which will require a $3.5 billion investment. He added that his government plans to upgrade the La Pampilla refinery.

Humala pointed out that new hydroelectric and thermal power plants have increased electricity production 6% per year. His government built over 1,200 miles of high voltage power lines as well as the country’s first power stations using wind and solar energy.

“Today the issue is not only energy security and solvency, but Peru’s ability to export energy,” Humala said.

Humala mentioned $157 million in tax incentives to companies that invest in scientific research and development. He added that the government is supporting diversification of the economy via fishing, forestry, textiles, food, metalworking, aviation, agriculture and more.

One quarter of Peru’s workforce and 6% of Peru’s GDP comes from agriculture. Humala declared that growth in agriculture can be twice as effective in reducing poverty as other sectors. He highlighted that agriculture exports have doubled in five years, and Peru is now among the world’s top 10 producers of quinoa, asparagus, coffee, mango, maca, olives, grapes, avocados and artichokes.

Humala cited a fund for irrigation projects which has allowed 200,000 families to farm almost 1,000 square miles. The government will spend $1.6 billion to finance two larger projects, Chavimochic III Etapa and Olmos, plus the beginning of Majes Sihuas II to expand cultivable lands by another 600 square miles.

Humala approved the National Plan to Fight Against Corruption 2012-2016, which said helps prevent, detect and punish corruption. He restructured the anti-corruption prosecutors division and created a special prosecutor for corruption.

Humala said his government has strengthened the independence of each branch of government in its autonomous control in the fight against corruption. He cited concrete results against corrupt politicians in Tumbes, Cajamarca, Ancash, Loreto, Pasco and Madre de Dios.

Humala also took credit for dismantling the Orellana mafia, whose extensive criminal network of judges is still being investigated.

“Today I can say that drug trafficking is not a top power in the VRAEM,” Humala said.

Humala cited that security forces during his term seized over 9,000 tons of drugs, destroyed 551 clandestine airstrips and closed 3,830 labs. Humala emphasized that his government’s coca-reduction strategy in the VRAEM is not led by defense or interior ministries, but by the agriculture ministry. He attributes his government’s success to emphasizing voluntary eradication by crop substitution.

“We continue to work towards improving the economy of the drug-producing regions to end their dependence on illicit crops.”

Humala predicted the area known as the VRAEM will be pacified as was the Alto Huallaga valley after capturing key Shining Path leaders there.

Police officers were slated to receive five pay raises, three of which have already been granted. After the fourth this December, police will no longer be able to wear the uniform while working private security.

Criminal sentences for murder were increased to a minimum 25 years in prison. Life imprisonment will be given in cases involving the murder of a minor, if more than one person are killed, if a woman is killed or if the killer belongs to a criminal organization. Conspiracy to commit murder was added to the criminal code.

“Yesterday we approved a measure that allows the police to access data which will allow them to locate the mobile phones and electronic devices used in flagrant crimes. With this measure, police will immediately be able to be locate the place from where a phone call originates and arrest whoever used the phone to commit the crime.

“This measure will improve the battle against extortion, kidnapping or any other kind of serious crime, and it complements the installation program of 40 cell phone blocks that has already been executed.”

Humala also mentioned a law authorizing reward payments to those who provide information leading to the capture of members of criminal organizations.

“In the coming weeks we will continue to enact legislation to combat extortion in construction and fight against drug trafficking.”

Humala highlighted Peru’s court victory in its maritime dispute with Chile, in which Peru gained 75% of the disputed area, or 19,300 square miles of fishing waters.

Humala says he has strengthened relations with the Pacific Alliance countries which include Peru, Colombia, Chile and Mexico, a regional bloc which combines to make the world’s ninth largest economy. Humala’s government hosted the 10th summit in Peru, in which he signed the Declaration of Paracas.

Humala declared that Peru’s economic and legal stability has inspired enough trust for world leaders to choose Peru to host international events including the 2012 ASPA summit, the 2013 World Economic Forum on Latin America, the 2014 United Nations Climate Change Conference, the 2015 World Bank Group and IMF Annual Meetings and the APEC forum in 2016.

Finally, Humala cited the elimination of the Visa Schengen requirement for Peruvians to visit the Schengen-participating countries of Europe.

Humala closed by saying that many of his campaign promises fulfilled, but some are still in progress. He still looks to unite a fragmented country and close the gaps of exclusion and inequality.