Another subsequent resolution announced that, Luis Alberto Vera, former police inspector general, would take over as commander of the National Police. 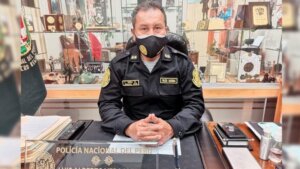 Mr. Tiburcio is a career lawman who gained notoriety as one of the members of the Peruvian Special Intelligence Group (GEIN) that in 1992 captured Abimael Guzmán, the now deceased leader of the Shining Path rebel group.

Minister Senmache told the media that the removal of the commander was within the president’s scope of authority and was done so following the law.

“(The change was made) with my recommendation, because I am going to make different changes. It is logical that if I did not make any changes, it would be concluded that we are going to have the same result to this day,” he told RPP.

However, for the former head of the Counter-Terrorist Directorate ( DIRCOTE) José Baella, the departure of Mr. Tiburcio is a very worrisome.

“This is mistreatment, this act weakens the police institution. If we count, at least in two years commands have been changed eight times. An institution as noble as Peru’s National Police should not be mistreated in this way,” he told the Peru21TV program.

“Why are Commander Tiburcio dismissed? He is a commander who has made a career in the institution, with more than 35 years of service. Institutional rules must be respected,” added Mr. Baella. 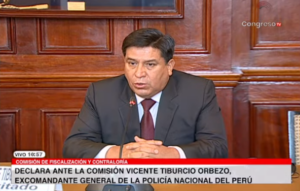 The removal of Mr. Tiburcio comes days after he issued an international arrest warrant for former presidential secretary Bruno Pacheco and the President ‘s nephew, Fray Vásquez. Both are being investigated by the prosecutor’s office for being part of an alleged corruption ring inside the Ministry of Transport and Communications.

Mr. Tiburcio also took aim at other members of President Castillo’s ruling Peru Libre party, including arresting officers associated with “Los Dinámicos del Centro,” a criminal organization that, according to investigations, was dedicated to obtaining illicit profits in exchange for favors with driver’s licenses. The irregular acts were carried out from the Regional Directorate of Transport and Communications of the Regional Government of Junín.