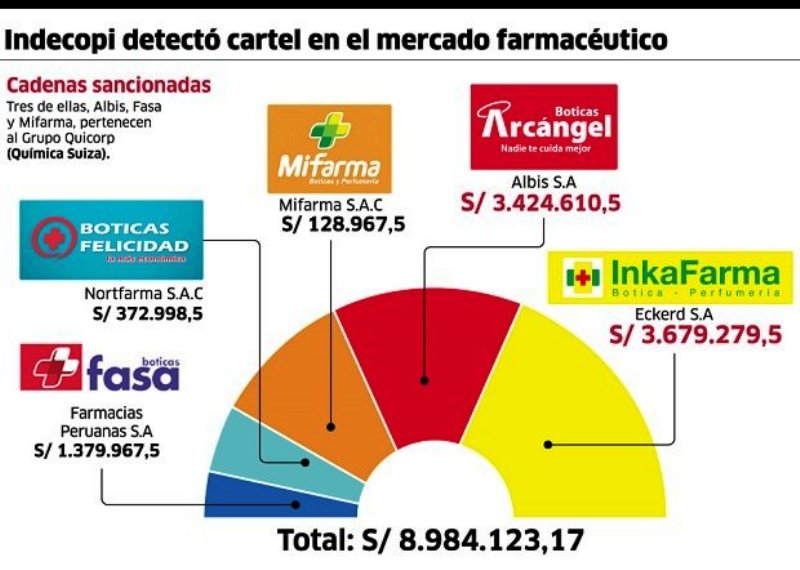 The National Institute for the Defense of Competition and Protection of Intellectual Property (Indecopi) on Tuesday announced a total of $2.6 million in fines for the Arcangel, Fasa, Inkafarma, Mifarma and Felicidad pharmacy chains. The agency also required each company to develop a training program to teach employees about anti-competitive practices and their legal consequences.

“The cartel was identified through monitoring of market prices and inspections carried out at the premises of pharmacy chains and their suppliers,” says an Indecopi statement. “These actions enabled [Indecopi] to obtain digital communications and files about agreements to increase the price of 36 pharmaceutical and related products.”

Indecopi said the five companies accounted for 72% of Peru’s pharmaceutical sales at the time of collusion between 2008 and 2009. The agency estimates that consumers paid an average of 5% more for the 21 pharmaceuticals and 15 nutritional products than otherwise.

The pharmacy chains have 15 days to appeal the Indecopi decision. The Boticas y Salud and Boticas Torres Limatambo (BTL) chains were investigated but not sanctioned.

As opposed to a scheme in which competitors fix prices through direct communication with each other, this case saw the pharmacy chains communicating indirectly through their suppliers and coordinated pricing around vendors’ suggested retail prices.

“Good morning, Julio. Please help me with these Kiddi prices in Chiclayo since you have it much lower than the rest,” a representative at German pharmaceutical firm Boehringer Ingelheim writes to an Arcangel employee. “It’s important to normalize the price before everybody races to the bottom.”

The email lists the firm’s suggested retail prices of $8.76 and $11.72 for two different sizes of its pediatric multivitamin syrup along with Arcangel’s prices of $6.86 and $9.76.

Competition-law lawyer Christian Chavez told Semana Economica that this form of price fixing is called “hub and spoke,” and that the failure to sanction the vendors who facilitated the scheme would likely result in legal appeals by the pharmacy chains.

“Indecopi has been clear in recognizing that the ‘hub and spoke’ was not yet regulated when this investigation began, and therefore it has not fined the laboratories. Several pharmacies have asked why they are not included in the investigation because the conversations involved them directly. Indecopi has made an interpretation that may be questionable,” Chavez said.

“When the [Inkafarma] chain was purchased, the Indecopi investigation had been ongoing for three years. Such practices do not continue today,” a representative at Inkafarma’s parent company, Intercorp, told El Comercio.

The source added that InkaFarma would appeal the decision because company representatives were not colluding on price, but rather seeking the same terms of purchase from its suppliers.

In a consolidation of Peru’s pharmacy industry, three of the sanctioned companies in Mifarma, Fasa and Arcangel now belong to Quicorp, holding company of Quimica Suiza. Intercorp, the holding company of Interbank and InRetail properties, bought InkaFarma in 2011. Boticas Felicidad is an independent chain with stores in Peru’s northern cities and headquartered in Piura.

Tourist struck by lightning at Machu Picchu in Peru