Peru state in standoff with government over illegal mining 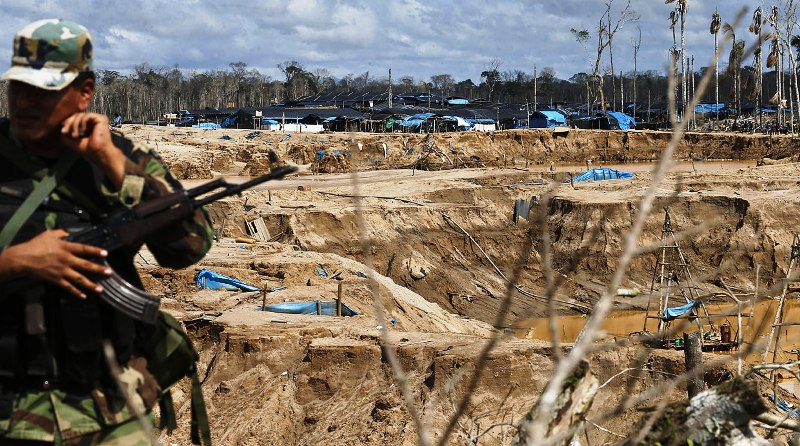 The Madre de Dios state in southeastern Peru has begun an indefinite strike in protest of the government’s efforts to reduce illegal mining and logging.

Protest leaders led by Madre de Dios governor Luis Otsuka demand the repeal of two laws which aim to restrict illegal mining and logging. Otsuka says the laws have failed to formalize small miners and have only led to six deaths and 52 injuries while encouraging illegal mining.

Supreme Decree 013-2015 establishes the regulation of gasoline and chemical inputs used in small-scale mining. Legislative Decree 1220 outlines a framework for the investigation and prosecution of illegal loggers.

Protesters marched and burned tires throughout Puerto Maldonado, the provincial capital of Madre de Dios, to demand the repeal of both laws. Local businesses and schools closed during the demonstrations.

“[Governor Luis Otsuka] wants complete impunity in Madre de Dios,” said environment minister Manuel Pulgar. “There you have a short-term vision from a person who believes that we must destroy the Amazon.”

Officials have confirmed that a government delegation traveled to Madre de Dios today to meet with Otsuka and other protest leaders.

Peru’s public ministry has launched a formal investigation into Otsuka for building public roads in the protected Manu national park. In September indigenous groups kidnapped and detained 40 tourists to the park to demand the resumed construction of the roads.

Park rangers regularly receive death threats in the area, presumably from illegal miners. Last week reforestation activist Alfredo Vracko was murdered in his home. Vracko was an outspoken critic of illegal mining and had reported operations in the area.

Illegal mining makes up over half of the Madre de Dios economy. Analysts estimate that the region produces 18 tons of gold per year, which is more than 10% of Peru’s total production.

“Illegal mining is something that not only reduces the rainforests, degrades the soil and contaminates the population, rivers and aquatic resources,” Pulgar says. “But it also creates sexual exploitation of minors among other crimes.”

“The situation of informality is particularly alarming. Illegal mining has devastated more than 50,000 hectares of forest. The mercury used to extract gold affects the health of thousands of people.”