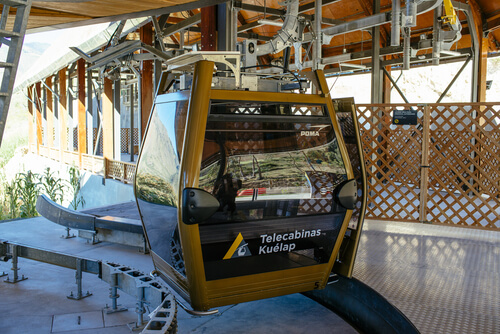 Peruvian authorities say they are optimistic that a new $20 million cable car system being built in Machu Picchu will bring even more tourists to the site of the famous ruins.

A line of cable cars at the UNESCO World Heritage site should bring in more domestic visitors while making transportation in the area more efficient, according to a report from state-owned news agency Andina.

“A cable car network may facilitate access to two other areas in addition to the Machu Picchu gateway,” Peruvian Association of Travel and Tourism Agencies (Apavit) President Ricardo Acosta told Andina. “Entrance to the sanctuary is in two sessions: each limited to 2,500 visitors. That is to say 5,000 visitors in total.”

He added that a cable car system will also allow people to easily travel to nearby Huayna Picchu and the Inca Trail that travelers use to reach Machu Picchu. Some 6,000 visitors per day come to see the world-renowned Incan ruins.

The multi-million dollar project has been compared to a similar one that was developed for the Kuélap ruins in the southern Amazon. Acosta said that the project in Machu Picchu would even be less complicated than it was in Kuélap.

He noted to Andina that this effort on part of tourism officials should encourage Peruvians to travel within their own borders rather than abroad.

“With a cable car system expected to reduce traveling time to the archaeological site and lower the visit’s cost, domestic tourists will flock to the Machu Picchu citadel,” he said.

As it is, Machu Picchu is already bringing in an estimated 4.4 million foreign tourists this year. That amount of visitors is expected to bring in a revenue of $5 billion into the country’s tourism sector.