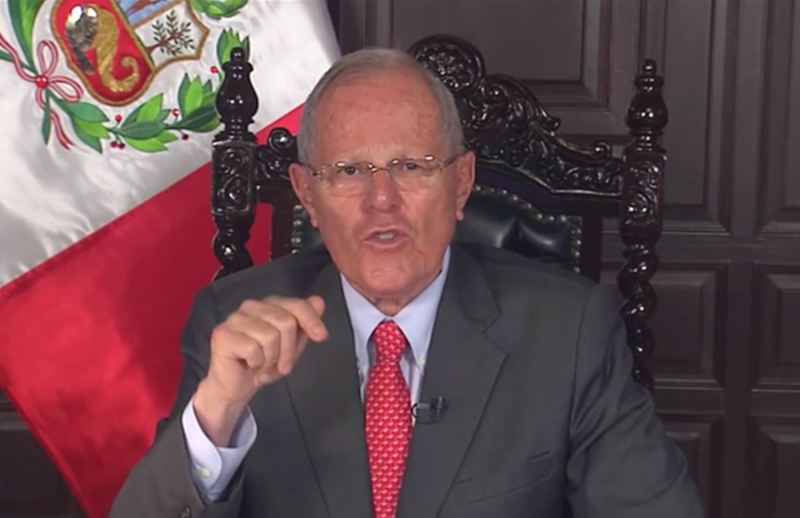 President Pedro Pablo Kuczynski has announced a plan aimed at limiting corruption in government in the wake of a scandal involving a healthcare adviser.

Kuczynski presented his five-point plan less than two weeks after the revelation that one of his top advisers was planning a scheme to send public healthcare patients to a clinic owned by a friend in exchange for commissions. The president’s approval fell eight points from 63% to 55% in the wake of the corruption scandal.

“That person betrayed my trust,” Kuczynski said in a speech announcing the government’s anti-corruption measures. “I want you to know that his case, accordingly, is in the hands of the law. It is unacceptable that in a country like ours, with so many needs, we have people trying to profit from the people’s money in government.”

The president’s package includes the controversial “civil death” law, which would bar government officials convicted of corruption crimes from occupying any position in local, state or national governments or agencies. Kuczynski said the law would be enacted by decree on Wednesday.

The president also announced that the Cabinet will conduct a review and reorganization of executive-branch staffers and advisers, with each Cabinet minister responsible for officials in their departments.

Kuczynski announced the convening of a council of state, comprised of the three heads of each branch of government, to focus on tackling corruption. He will also create a “presidential integrity” commission to report directly to the president on ways to reduce and prevent corruption.

“As I said and I meant it, fighting corruption starts from the top, from above. And we’re doing so with immediate action. The corrupt will resist, I am sure of it, but we shall overcome,” Kuczynski said.

“I think he has done well in coming out in a serious, strong and clear way to announce the five measures to combat corruption, and resuming his leadership of government,” veteran Popular Action congressmen Victor Garcia told Andina.

Representatives from the leftist party, Broad Front, also backed the “civil death” measure which they have long championed.

“I don’t see anything here except ‘civil death,’ which is surprising he did not present on the first day of his government,” Popular Force spokesman Luis Galarreta told Peru 21. “The measures proposed seem insufficient to me. We gave him decree powers to fight corruption and he should have enacted laws the next day … Now the ministers will assess their departments? Where have they been?”

Despite criticizing what they called too little too late, Popular Force leaders will support Kuczynski’s anti-corruption initiatives.

“[Kuczynski’s government] was the victim of an assault by this endemic problem of corruption in Peruvian society,” Peruvians for Change spokesman Carlos Bruce told Andina. Bruce added that civil death “will deter many rascals from pilfering in government.”

“A housecleaning is necessary in public administration, so as not to be burdened with the liability of having corrupt people who came to work in government during previous administrations.”