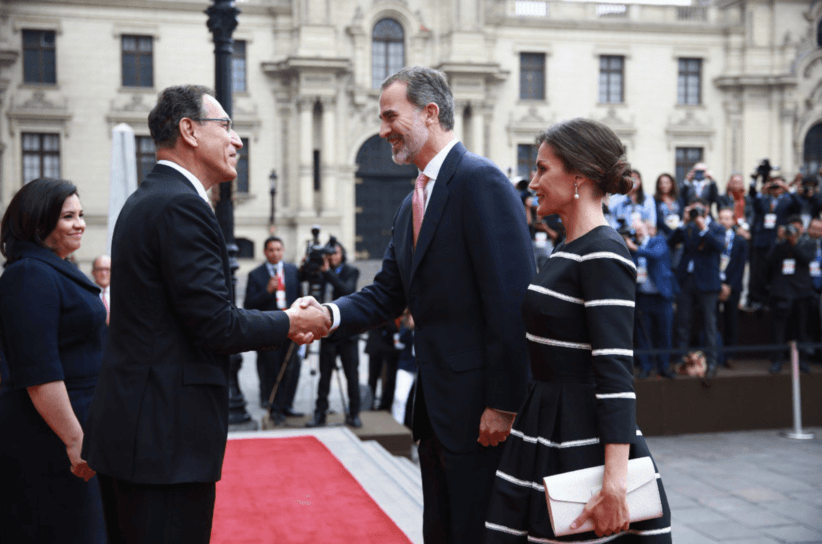 The King and Queen of Spain visited Peru Monday in a meet and greet with President Martin Vizcarra.

King Felipe VI and Queen Letizia of Spain came to the Government Palace in Lima in the beginning of a three-day visit to the Andean country.

In a ceremony, the Spanish King was given the Medal of Honor by Peru’s Congress for his role in consolidating ties between the two countries.

“In virtue of this strong relationship, so fraternal, that has united us for many centuries, but that has become even stronger in these recent times,” King Felipe VI began, “I assume this enormous honor with a contractual obligation, further convinced of this bond that we want to be eternal and bless both our countries.

After the official ceremony, the royalty had a meeting with Congressional delegates. They were later named honorary residents of Lima and given keys to the city.

“In traveling throughout our lands, your majesty, at each step and in each corner of our country we recongize the traces, the legend of Spanish culture,” said President of Congress Daniel Salaverry.

Vizcarra said that the arrival of the King and Queen to Peru is proof of a strong relationship between the two countries that will continue for some time. In February, Vizcarra will be heading to the Spanish capital for the ARCOmadrid 2019 art fair where Peru is the country of honor.

Fujimori to go to court in forced sterilisation case