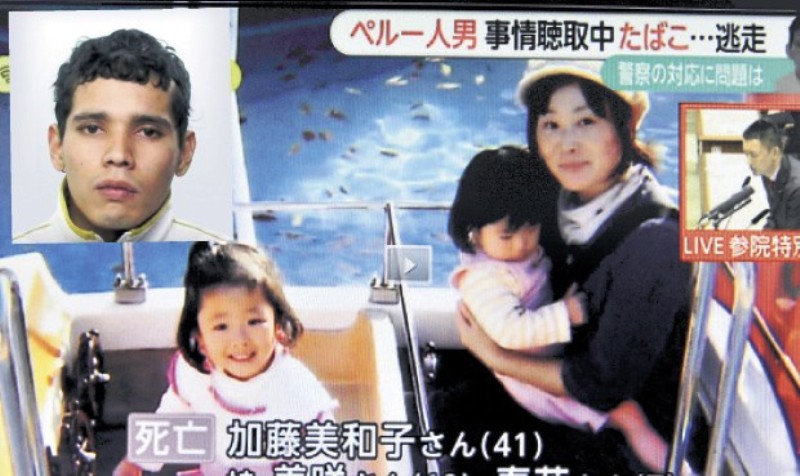 A Peruvian citizen from Lima has been arrested in the murders of six people in the Kumagaya suburb outside Tokyo, Japan.

Japanese police arrested Vayron Nakada after he jumped from the second-floor apartment where he had stabbed a mother and her two young daughters to death. Nakada cracked his cranium in the fall and remains in critical condition.

Nakada is also accused of killing an elderly couple and an 84-year-old woman in the Saitama province outside Tokyo.

Japanese police had Nakada in custody on Sunday when he was found sleeping on a park bench. However he escaped custody on a cigarette break and disappeared on a crowded avenue. The murders occurred in the following days.

Despite having emigrated to Japan 10 years ago, Nakada held unstable employment, had no fixed address and did not speak Japanese well. According to Japanese law, he faces life in prison or the death penalty if found guilty of the six murders.

Nakada is the brother of Pedro Pablo Nakada, the most prolific serial killer in Peruvian history. Pedro Pablo Nakada murdered 25 people in the city of Huaral outside Lima between 2005 and 2006. After his arrest he told police God told him to cleanse the population, prompting the nickname “Apostle of Death.”

Pedro Pablo Nakada was sentenced to 35 years in prison, but was transferred to a psychiatric ward in San Juan de Lurigancho after being diagnosed with paranoid schizophrenia.

La Republica reports that Vayron Nakada also suffers from paranoid schizophrenia as does the men’s sister.