Peruvian mummy to be restored with 3D printer 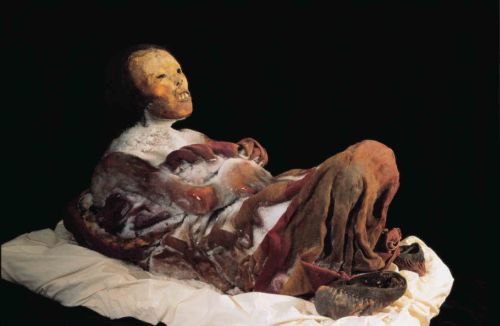 The Lady of Ampato is getting a makeover. And as insulting as it may sound, it’s actually her whole face that needs to get redone.

The Lady of Amptao mummy, commonly known in Peru as “Mummy Juanita,” was found at the summit of the 6,288-meter-high (20,629 feet) Ampato Volcano near Peru’s southern city of Arequipa in 1995. She is believed to have been an offer in an Incan religious ceremony between 1440 and 1450 AD. She was likely mummified in her early teens. When she was discovered 23 years ago, she still had all her internal organs in tact and was found wrapped in a blanket along with elaborate jewelry and clothing commonly used in sacrifice ceremonies.

The 3D printing project has actually been in development for a year as USCM officials have collaborated with UK forensic scientists.

According to state-owned news agency Andina, in order to remake the Lady of Ampato’s face, researchers will use a high-tech photogrammetry software that uses design techniques to superimpose images.

They will then use other sets of modern equipment to conduct analyses on teeth shape and mouth structure. This will then let scientists know the mummy’s approximate height, age and other anthropological information that they can use to make a 3D replica that is as precise as possible.

In the past, anthropologists have hypothesized that “Mummy Juanita” was hit in the head with a blunt object, which would follow in line with a sacrificial killing. Per Incan custom, when certain babies were born they were raised to eventually be sacrificed to the gods that inhabited Ampato Volcano. On the volcano top, a high priest would stand over the child and hit him or her over the head to deal the fatal blow before leaving the child buried at the crater.

“Mummy Juanita” was found in large part thanks to a volcanic eruption that slid it partially down the mountain and allowed anthropologists Johan Reinhard and Miguel Zarate to discover her still in-tact corpse.