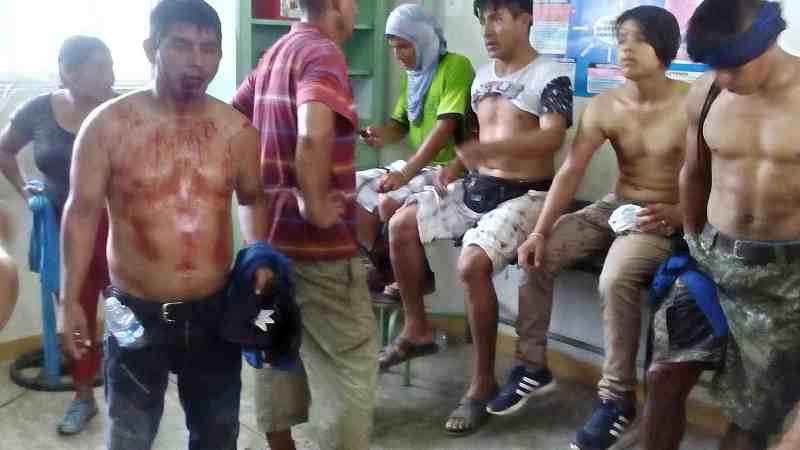 Clashes between political factions in Peru’s eastern state of Ucayali have left at least three people dead and dozens injured.

Ucayali’s tiny town of Curimana was the site of deadly violence in a battle between opposing factions backing two different officials for mayor. A mob trying to prevent Loiber Rocha from assuming the mayoralty fought his supporters and police in a bloody riot which left three people dead and 43 injured, including 17 police. Peru 21 reports that four people were killed.

Rocha was reelected to a third term as mayor of Curimana in 2014 regional elections before being removed for investigations into corruption. After six months as a fugitive, an Ucayali court cancelled his arrest warrant and Peru’s elections board reinstated him as mayor. But a mob of 100 people armed with sticks, rocks and guns descended on his home yesterday to prevent him from taking office.

“This is a group of people on orders of [interim mayor Delsy Vera] and supported by the Defense Front of Curimana which, in its quest for power, has incited people to violence and staged an attack on my life. My followers repelled the attacks with stones despite being at a disadvantage because the other side was armed with shotguns,” Rocha told La Republica.

Ucayali police chief Jorge Savaria told Canal N that police were caught between two armed mobs composed of Rocha’s and Very’s supporters. Eighty police officers were dispatched from the Ucayali state capital of Pucallpa in anticipation of violence yesterday. Savaria said that 100 more were sent since the conflict to restore order.

Rocha’s opponents say that his 10-year management since 2006 has been marked by corruption in a district which receives considerable royalties from natural-gas producer Duke Energy. Rocha was removed from office for a case in which he purchased $600,000 of machinery to build roads connecting the city to its neighbors. Comptrollers say the price was inflated and the roads were never built.

“There are no special interests here. It is the people who do not want him and that’s why we are on indefinite strike since Monday to protest the resolution that frees this man compromised by such a serious charge and whose arrest warrant is being appealed,” opposition leader Eli Santillan told La Republica.

“We do not want one more day of this man managing Curimana funds. We do not want him to steal our money. We are ready to fight so he does not return to manage one sol because it is risky.”

The Padre Abad province of Ucayali state has a population of less than 60,000, of which less than 9,000 live in Curimana. Despite annual royalties in excess of $1 million, the town does not have running water or sewage and many children suffer from malnutrition and illiteracy.

El Comercio and La Republica have published reports on suspicious purchases under Rocha’s administration, and both newspapers said earlier in the year that the political situation could explode at any moment.

With incidence of poverty comparable to Lima, Moquegua or Tacna, Ucayali is home to some of Peru’s lower rates of poverty with between 12% and 15%. However, government data shows that 25% of Curimana’s population lives in poverty, with 4% in extreme poverty, while 38% suffer from malnutrition and 63% do not have electricity.