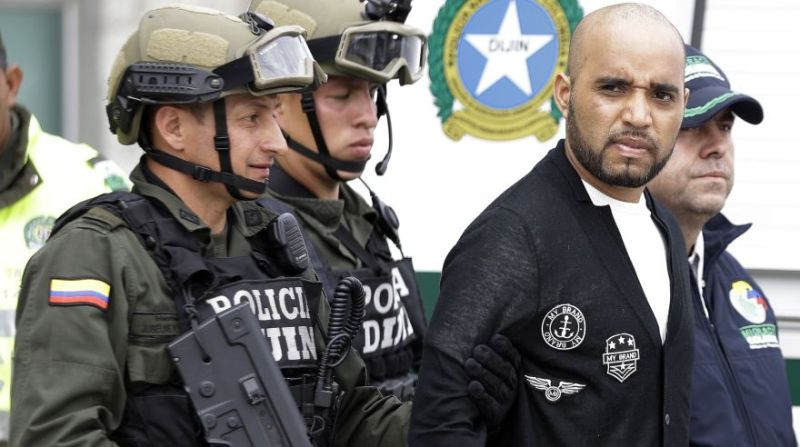 The alleged leader of Callao’s feared gang, Barrio King, was arrested by a joint operation between Peru’s anti-drug unit Dirandro, Colombian police and Interpol. Colombian police deported Galvez back to Peru within 24 hours because he had not entered on a valid visa.

Law enforcement had been tracking Galvez since an arrest warrant was issued last December. In March authorities learned he was in Ecuador. He stopped in Panama before going to Medellin. Galvez was arrested with a false Ecuadorean passport. Galvez had grown his hair and beard to change his appearance.

“I have the right to be presumed innocent,” Galvez shouted at journalists after being delivered in Lima, according to the Associated Press.

Galvez’s gang is believed to control cocaine shipments which are smuggled out of Peru through the seaport of Callao, Lima’s port district where Galvez is from. Police say his organization also uses its control over construction unions to charge extortion payments from real estate developers in Callao.

Galvez is believed to have ordered the high-profile assault on drug trafficker Gerald Oropeza, in which a team armed with assault rifles and grenades attacked Oropeza’s Porsche SUV on a major avenue in Pueblo Libre. He is also believe to have ordered the murder of Callao security guard Wilbur Castillo.

Peruvian and Colombian media have called Galvez “the ‘Chapo’ Guzman of South America.”

Galvez served 11 of a 15-year sentence in Callao’s Sarita Colonia prison from 2005 to 2014. Police believe he built his criminal organization while incarcerated, and he was unexplainably released early for good behavior.

“Under no circumstances will [Galvez] return to Sarita Colonia prison because it is a medium-security prison, and given the danger of the individual I have to assume that the prison board will determine a special scheme,” justice minister Aldo Vasquez told Andina.

Vasquez added that Galvez could be jailed at the maximum-security Challapalca prison, located over 15,000 feet above sea level and more than 800 miles from Lima, in Peru’s southern state of Tacna.

The Associated Press reports that Galvez is wanted in connection with 101 murders in Peru. The Peruvian government had offered a $150,000 reward for his arrest, more than for any other fugitive in the country.

A gang war over control of Peru’s top seaport has caused a spike in murders in Callao, prompting the government to declare martial law which will complete six months by the end of May.