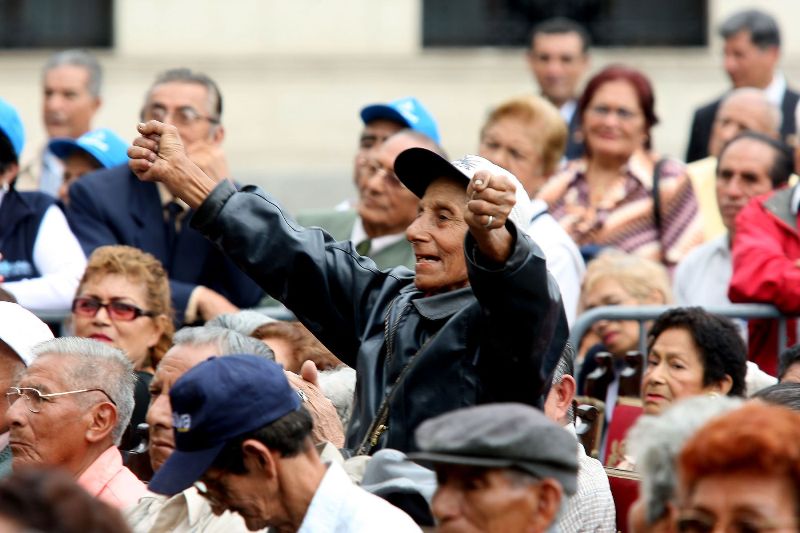 The mortality tables ultimately led to the resignation of SBS chief Daniel Schydlowsky, despite his denials that the new life expectancy data would change benefits. But the outcry went further in prompting calls for Congress to pass a law which would allow enrollees to dissolve their pensions at the age of 65, withdrawing 95.5% of their accounts in cash and paying the rest into the EsSalud public healthcare system.

With a bill already approved in the congressional finance committee, the option to allow pensioners to dissolve their accounts is the most popular at the moment. Proponents led a march through central Lima to in which hundreds of demonstrators demanded the right to their retirement savings.

Proponents say allowing pensioners to withdraw their contributions would motivate the AFPs to be more profitable, which would entice their customers to leave their savings untouched.

Other economists suggest the government should loosen the strict rules in how AFPs can invest pensioners’ savings. They point to the higher performance of the AFPs’ company portfolios compared to those of pensioners.

While the private pension funds, known as AFPs for the Chilean accounts they were modeled on, say they support reform, they want to wait until the electoral season passes.

“We are willing to discuss any measures to improve the system and, above all, benefit pensioners,” said Luis Valdivieso, president of the AFP trade group. “But as long as they fall within a responsible, technical policy analysis removed from political and electoral motivations.”

Another criticism of the AFPs are the high commissions they charge. A recent study showed Peru’s AFPs charged more to manage their customers’ money than their counterparts in Chile and Colombia, while their portfolios earned less than those in the other countries.

Peru’s AFPs charge higher commissions despite government auctions held every two years which give one of the country’s four AFPs a monopoly over all new enrollees into the private pension system. The government awards the license based on the lowest commissions, as opposed to portfolio performance or other metrics such as customer service.

The government-granted monopoly system, which some say encourages poor customer service, led to the idea of opening the private pension fund system up to banks, investment firms and insurance companies.

While the political climate points to an overhaul in the private pension system, its troubles pale in comparison to the ONP public pension program. The state fund ran a $1.8 billion deficit in 2014, which required the public treasury to make up the difference. The ONP requires pensioners to contribute for 20 years in order to qualify for a pension when they retire. Less than 50% of enrollees will qualify, leading some analysts to liken the system to theft.

If Congress mandates the AFPs to allow pensioners to withdraw their life savings at 65 years old, new enrollees to the ONPs will theoretically plummet to zero.

A recent Ipsos poll showed that public confidence in the each system’s long-term solvency was about the same. With just 38% and 40% for the AFPs and ONPs respectively, neither program inspires trust in even half the population.

Another quirk in Peru’s retirement system is that just one in four Peruvians are enrolled in either an AFP or ONP. The state requires formal workers to contribute to some kind of plan, which workers are free to choose, but over 70% of workers operate in the informal economy.

Any pension reform, which Peru is likely to see in the next year, will look to expand the coverage to a greater number of Peru’s retirees.