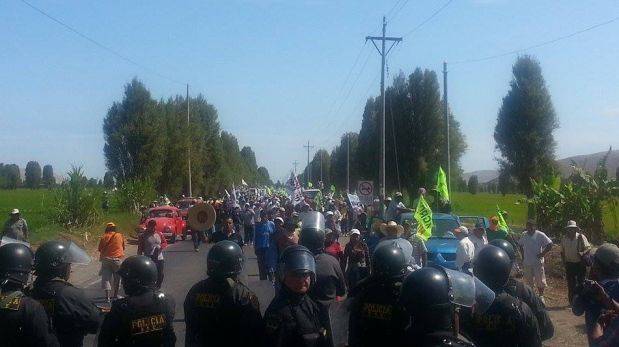 Nine people were arrested and 12 injured in confrontations with police during the second day of protests against the Tia Maria copper mine in Arequipa.

Southern Copper expects to receive a building permit this month for the Tia Maria project, which is estimated to be worth $1.4 billion over the next 20 years. Protesters called an indefinite strike on Monday to demand the withdrawal of the company from the region.

The protestors comprise mostly farmers and women who believe the copper mining, which is projected to produce 120,000 tons per year, will pollute their lands. The protests are located in the Cocachacra district of Islay province, in Arequipa department near the port city of Mollendo.

2000 police officers from Arequipa, Moquegua and Lima were dispatched to the area to prevent the blocking of the Panamericana Sur highway. When about 1000 protesters tried to block the highway, police officers used tear gas to disperse the crowd. The protestors threw rocks at the police and confrontations broke out.

Arequipa’s chief of police, Luis Blanco, has asked protestors for patience as talks have been scheduled for April 1. “I hope they sit down for talks. Last week three ministers came to find a way out of this, but unfortunately the people are betting on stoppage.”

The protests count the support of four mayors representing Islay, Cocachacra, Dean and Punta de Bombon, who signed a statement requesting the withdrawal of Southern Copper from the region.

Southern Copper, a subsidiary of Grupo Mexico, produced 680,000 tons of copper in 2013, of which 339,000 were mined from its Toquepala and Cuajone mines in southern Peru.